Kilmarnock in History: The rise of James ‘Bud’ Maxwell

Welcome to the 14th installment of our Kilmarnock In History series, by club historian John Livingston.

During the close season of 1929, a couple of Kilmarnock players went with Scotland on a short tour of Northern Europe.

Left back Joe Nibloe, who had impressed on his debut in a 1-0 win against England, was in the Scotland team that beat Norway 7-3 in Oslo on 28th May, whilst Hugh Morton played against Germany in a 1-1 draw in Berlin on 1st June. Some three days later, both players were in the team that beat Netherlands 2-0 in Amsterdam.

On 3rd July 1929, Kilmarnock F.C. and all of Scottish football were shocked by the news that the club trainer and masseur, John McWhinnie had died, after a short illness, in a nursing home in Pollokshields.

He was only 44 years old, but was a much-loved character not only in the game, but also in the town for the sterling work he did to help the wounded soldiers at both the Dick Institute and Dunlop House during and after the Great War.

A trainer with both Ardeer Thistle and Kilwinning Rangers (being with the latter when they won the Scottish Junior Cup in 1909), he also assisted James Wilson at Rangers, before joining Kilmarnock in 1912.

During his 17 years with the club, he was also trainer on occasions for both the Scottish League and Scotland teams. His funeral took place the following Saturday, with many people lining the streets to pay their respects as his coffin was transported from his home in Portland Road to Kilmarnock cemetery.

In the early few months of the 1929-30 campaign, Kilmarnock, fielding mainly reserve teams, lost to Ayr United in the Finals of both the Ayr Charity Cup and the delayed 1928-29 Ayrshire Cup.

They also drew 1-1 with Rangers in a Benefit game at Rugby Park for the late John McWhinnie, which was reportedly watched by a crowd in excess of 4,000. Their League form however against both these clubs was much more encouraging, beating Ayr United (2-0) and Rangers (1-0) at Rugby Park.

In October and November, full back Joe Nibloe made three representative appearances, playing in the Scottish League team that beat the Irish League 4-1 in Belfast and the Football League 2-1 at Ibrox, and also with Scotland in a 4-2 win against Wales in Cardiff.

Injuries to centre forwards Harry “Peerie” Cunningham (top League scorer again in 1928-29 with 23 goals) and Jimmy Weir saw Robert McGowan arrive on loan from Rangers, initially for a seven-game spell in the autumn months that saw him score four goals in seven games, but he eventually returned in February until the end of April, and scored another 14 goals in eight games, which included five goals against Morton (H 7-2) and another four goals against Airdrieonians (H 7-1).

His 18 goals was not a bad return for 15 games, and he ended as Kilmarnock’s top League goal-scorer in a season that saw them finish in 8th place with 39 points from 38 games.

Jimmy Weir, one of the players McGowan was initially brought in to replace, had a nightmare first half to the season due not only to injuries, but also loss of form. He only played three League games, scoring once, but was brought in at centre forward for the 1st Round tie in the Scottish Cup against Paisley Academicals on 18th January 1930.

He proceeded to score six goals in a record 11-1 win at Rugby Park – the first man to achieve six goals in a game for the club – but it proved to be his last appearance, as he was sold to Queen of the South a couple of weeks later.

Killie’s hold on the Cup was relinquished in the 2nd Round, when they lost 4-2 at Hamilton. A short three-day trip to Northern Ireland took place over the last three days of April, and on successive days Kilmarnock drew 1-1 with Linfield, beat Derry City 2-0 and lost 3-1 to Ballymena.

The week after losing 3-2 after extra time to Ayr United in the Ayr Charity Cup Final, a party of players and officials set off by ship to North America – the club’s first ever trip abroad – arranged by Bobby Muir, the secretary and treasurer of the Ontario F.A.

On the North American tour was a 17-year-old Scottish schoolboy Internationalist James “Bud” Maxwell. His father James Maxwell had a couple of spells at the club, and indeed, was still a registered player when the Great War broke out, but sadly was killed in action in April 1917. 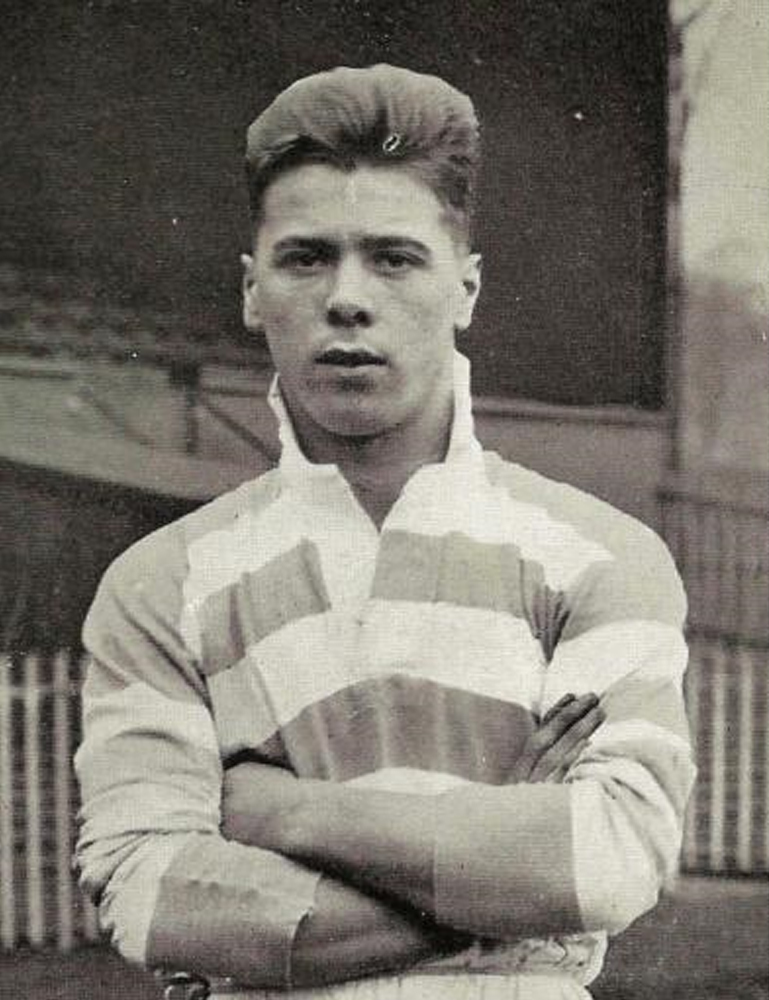 The teenage centre forward only played three games, scoring three goals on the tour, but there were high hopes amongst the management that he would soon become a first team regular.

Not too long after the start of the 1930-31 season he made his League debut at Motherwell in a 1-1 draw on 6th September 1930, and four days later scored twice at Rugby Park in a 5-3 win over Ayr United in a delayed 1929-30 Ayrshire Cup Semi-Final, in which the Kilmarnock team, apart from Joe Nibloe, consisted mostly of reserves.

The reserve team went on to win the 1929-30 Ayrshire Cup Final, beating Beith 3-1 in late October. The Division 1 season ended disappointingly with Kilmarnock in 11th place with 35 points from 38 games, but James “Bud” Maxwell was top scorer with 18 goals in 27 appearances.

They did have a decent Scottish Cup run, beating Inverness Citadel (A 7-0), Hearts (H 3-2), Montrose (A 3-0) and Bo’ness (H 5-0 after drawing 1-1 away), with Maxwell scoring six times in the five games, which included a hat-trick at Inverness. Unfortunately, he was out with an injury for the Semi-Final against Celtic at Hampden, and was sorely missed as Killie lost 3-0 in front of a 53,973 crowd.

The season ended with more silverware for the club, as they won the 1930-31 Ayrshire Cup, beating Beith 5-1 in the Final at Rugby Park, and after losing at Somerset Park in the last League game of the campaign, they made amends three days later by beating Ayr United 5-2 in the Kilmarnock Charity Cup, with “Bud” Maxwell scoring four goals.

During the season, Joe Nibloe was in the Scotland team that drew 0-0 with Ireland in Belfast and won 2-0 at Hampden against England. In May, he was in the touring Scotland teams that lost to Austria (5-0 in Vienna) and Italy (3-0 in Rome), but won 3-2 in Geneva against Switzerland.

The 1931-32 season saw a fine Motherwell team become Champions, losing only twice in their 38 games. One of those defeats was inflicted by Kilmarnock at Rugby Park in late August, when teenager “Bud” Maxwell notched the only goal.

Kilmarnock had a decent first half to their League campaign, the highlight of which was an 8-0 hammering of Dundee United on 12th December 1931 at Rugby Park, with veteran winger Jock Aitken scoring five goals.

However, after the turn of the year, the form dipped, with perhaps the only decent performance being the remarkable comeback at home to Leith Athletic at Rugby Park, when they came from being 3-0 down after 20 minutes to win 6-3 on 12th March 1932.

They were in 4th place after that win with six games left to play, but lost all of them, to finish up in 9th place on 39 points, with “Bud” Maxwell finishing as top scorer with 20 goals.

Whilst the League form disappointed, the club enjoyed a fine run in the Scottish Cup. They beat East Fife (H 4-1), Albion Rovers (H 2-0) and then Dundee United (H 3-0 in a replay after a 1-1 draw). A fine 3-1 win at Dunfermline in the Quarter-Finals was followed by a 3-2 win in the Semi-Finals against Airdrieonians at Firhill Park, watched by a crowd of 28,138.

The Final on the 16th April saw Killie deservedly go ahead through “Bud” Maxwell, three minutes before the interval – his 6th goal in the Cup run. However, a weak shot by Bob McPhail somehow evaded keeper Willie Bell early in the second half to earn Rangers a fortuitous equaliser, and the game eventually ended in a 1-1 draw before a crowd of 111,982.

The replay the following Wednesday turned out to be a game too far for Killie, and they lost 3-0 in front of a 105,695 crowd.  Joe Nibloe also won two more caps for Scotland, against England at Wembley (a 3-0 defeat) and France in Paris (a 3-1 win).

The game in Paris, however, proved to be his last cap as a Kilmarnock player.