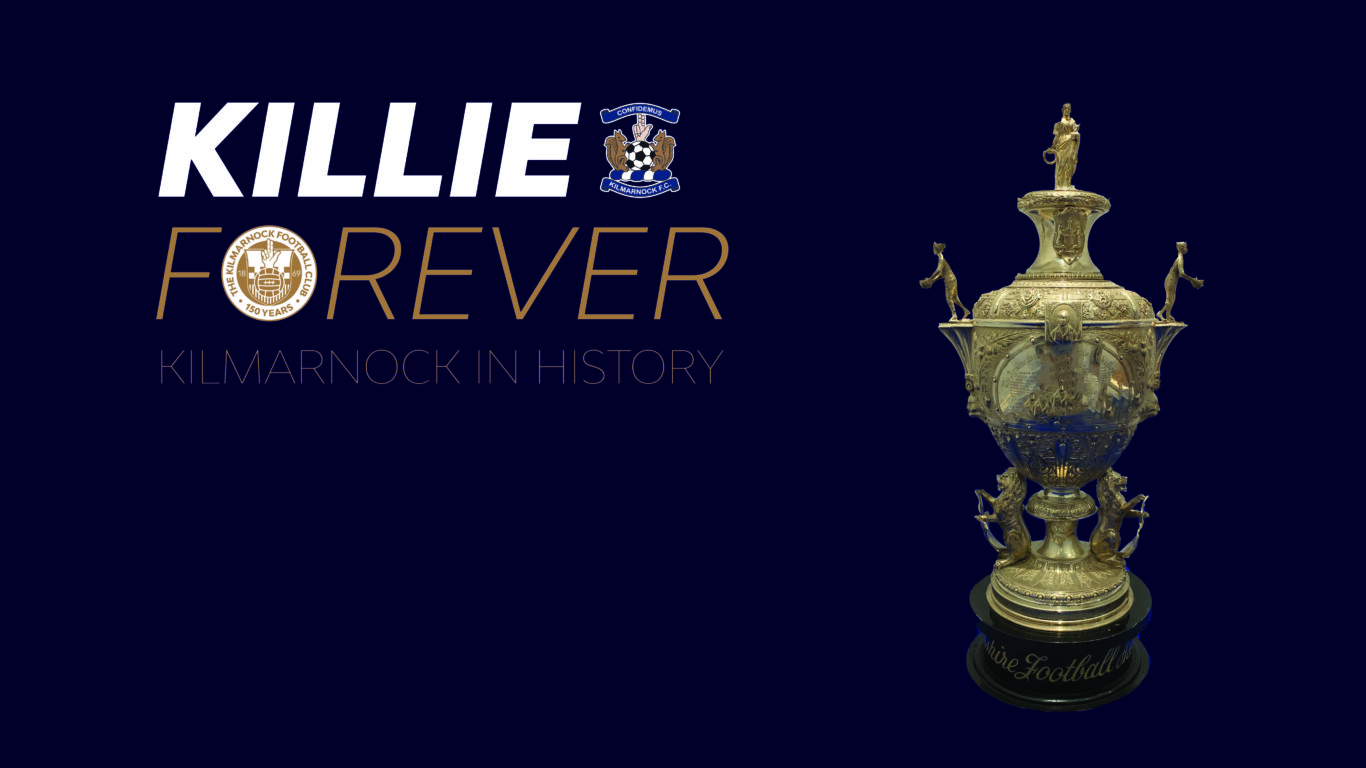 Welcome to the fifth installment of our Kilmarnock In History series, by club historian John Livingston.

Kilmarnock ended the 1894-95 campaign as runners-up in the Ayrshire Championship to Ayr F.C. However, had they not had three points deducted for fielding an ineligible player, they would have finished level with them on points and been involved in a play-off for the title.

They also reached the Final of the Ayrshire F.A. Challenge Cup once again, drawing 2-2 with Annbank in the Final at Rugby Park on the 2nd April, but thereafter, both clubs were embroiled in a bitter row with the Ayrshire F.A. about the venue of the replay.

The Ayrshire F.A. wanted it to be played at Warner Park in Stevenston, but the two clubs refused, both agreeing that the replay should be held in the town of Kilmarnock, where every other previous Final and replay had been held. Eventually, after a month with no settlement reached, Kilmarnock and Annbank decided to meet in the replay at Rugby Park, with Annbank winning 4-2.

Unfortunately, the Ayrshire F.A. declared it an unofficial game and withheld the Cup and badges. This Final was known thereafter as the “Cupless Final”.

They went on to enjoy a reasonably decent first season in the Scottish League, finishing in joint 3rd place with Renton, both having taken 21 points from their 18 games. However, this meant they had to play-off for the 3rd place, as only the top three clubs were allowed to be in the elections for a place in Division 1. Sadly, Kilmarnock lost 2-1 to Renton in the play-off at Cathkin Park, and were officially placed fourth.

Despite losing to the inaugural Scottish Qualifying Cup winners Annbank in the 1st Round of the Scottish F.A. Cup in January 1896, Kilmarnock went on to win both the Ayrshire F.A. Challenge Cup (beating Galston 7-2 at Holm Quarry in Final) and the Kilmarnock Charity Cup (beating Ayr Parkhouse 1-0 in the Final).

In 1896-97, Kilmarnock took part in the Scottish Qualifying Cup for the first and only ever time, and it turned out to be a historic winning campaign for the club. They beat Lugar Boswell (A 6-2) and then Saltcoats Victoria (H 13-2), with James “Bummer” Campbell scoring eight goals in the game. Further wins over other Ayrshire clubs Ayr F.C. (H 7-1) and Hurlford (H 4-2) took them to the Quarter-Finals, where they beat Partick Thistle 5-2 at Inchview Park. 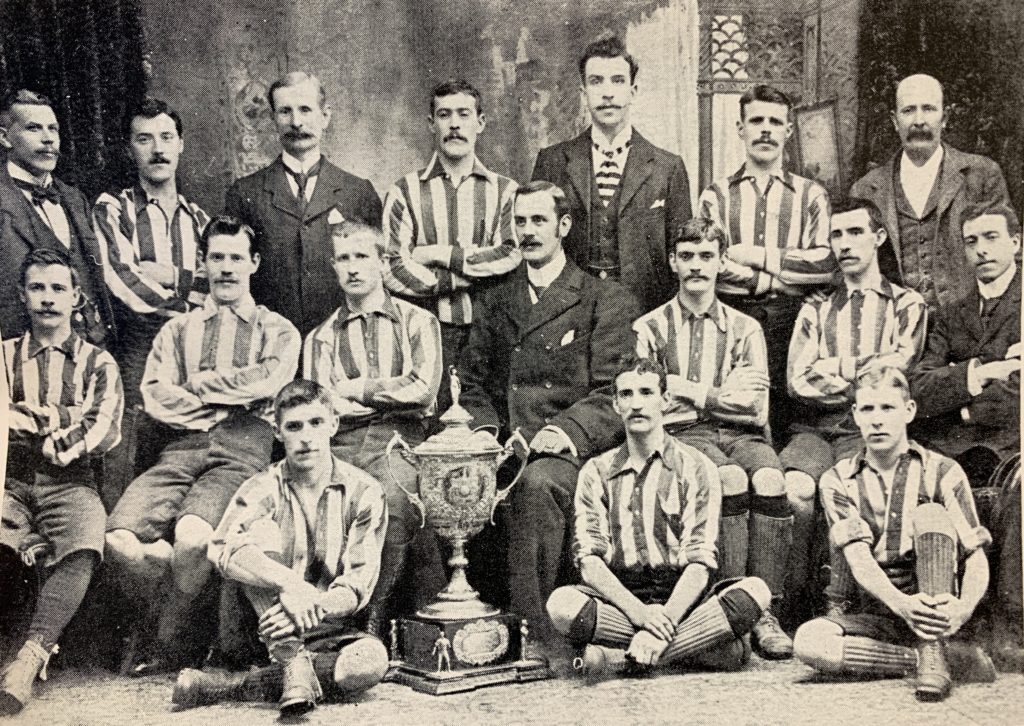 The 1897 Scottish Qualifying Cup winning side.

The Semi-Final saw them beat Dunblane 2-0 at Rugby Park, and in the Final played at 2nd Hampden Park on December 5, they beat Motherwell 4-1 before an attendance estimated between 4,000 and 5,000.

Buoyed by the success, they went on to reach the Scottish Cup Semi-Finals for the first time, but despite a hat trick from James “Bummer” Campbell, they lost 4-3 to Dumbarton at Boghead Park. Before the game started, they protested to the referee that Dumbarton had broken the competition rules by not playing in their registered colours. The referee forwarded the protest to the SFA, but it was thrown out by the ruling body.

In the Scottish League Division 2 campaign, Kilmarnock once again did reasonably well, finishing in third place with 21 points from 18 games. However, due to a change in rules, it was not a good enough finish to get into the elections for a place in Division 1.

The club was also involved in a mini-league with Ayr F.C. and Ayr Parkhouse, which was played over the course of the season, and known as the Ayrshire Championship. It proved a great success, and with three wins and a draw from their four games, Kilmarnock ended up as the Champions.

The 1897-98 campaign proved an outstanding one for the club. They won the Ayrshire Cup, beating Galston 9-3 at Holm Quarry in the Final on 26th February. They also reached the Scottish Cup Final for the first ever time, beating Dalbeattie-based club, 6th Glasgow Rifle Volunteers (H 5-1), Leith Athletic (H 9-2), Ayr Parkhouse (A 7-2), and in the Semi-Final, they beat Dundee 3-2 at Rugby Park after being down 2-0. Sadly, they lost 2-0 to Rangers at 2nd Hampden Park in the Final on March 26.

However, the following Saturday, April 2, they had cause for celebrating success in the League.

Requiring just two points (a win or two draws) from their last two fixtures – both of which were ironically against the only team who could pip them for the Division 2 title, Port Glasgow Athletic – Kilmarnock clinched it with a 2-1 win at Rugby Park, making the result of the visit to Port Glasgow the following Saturday irrelevant.

Kilmarnock actually won all nine home games in the League during the campaign, and did not fail to score in any of their 18 games, from which they totalled 29 points. The season ended in style with the Kilmarnock Charity Cup being won, beating Ayr Parkhouse 4-1 at Rugby Park in the Final on the 21st May.

Everything was rosy at Rugby Park approaching the Scottish League elections. The club had enjoyed a wonderful season, finishing as Division 2 Champions, Scottish Cup Finalists, winners of the Ayrshire Cup and Kilmarnock Charity Cup, and with another player, winger Robert Findlay getting capped for Scotland against Wales. It all counted for nothing at the Scottish League AGM elections in June.

They went into the ballot with Port Glasgow Athletic and Morton from Division 2 and the Division 1 bottom trio of Partick Thistle, St. Bernard’s and Clyde. There was a great deal of annoyance down Ayrshire way when the voting favoured the Division 1 trio all retaining their status, with the bottom club Clyde (one win all season) being preferred to Kilmarnock.

It was a real blow.