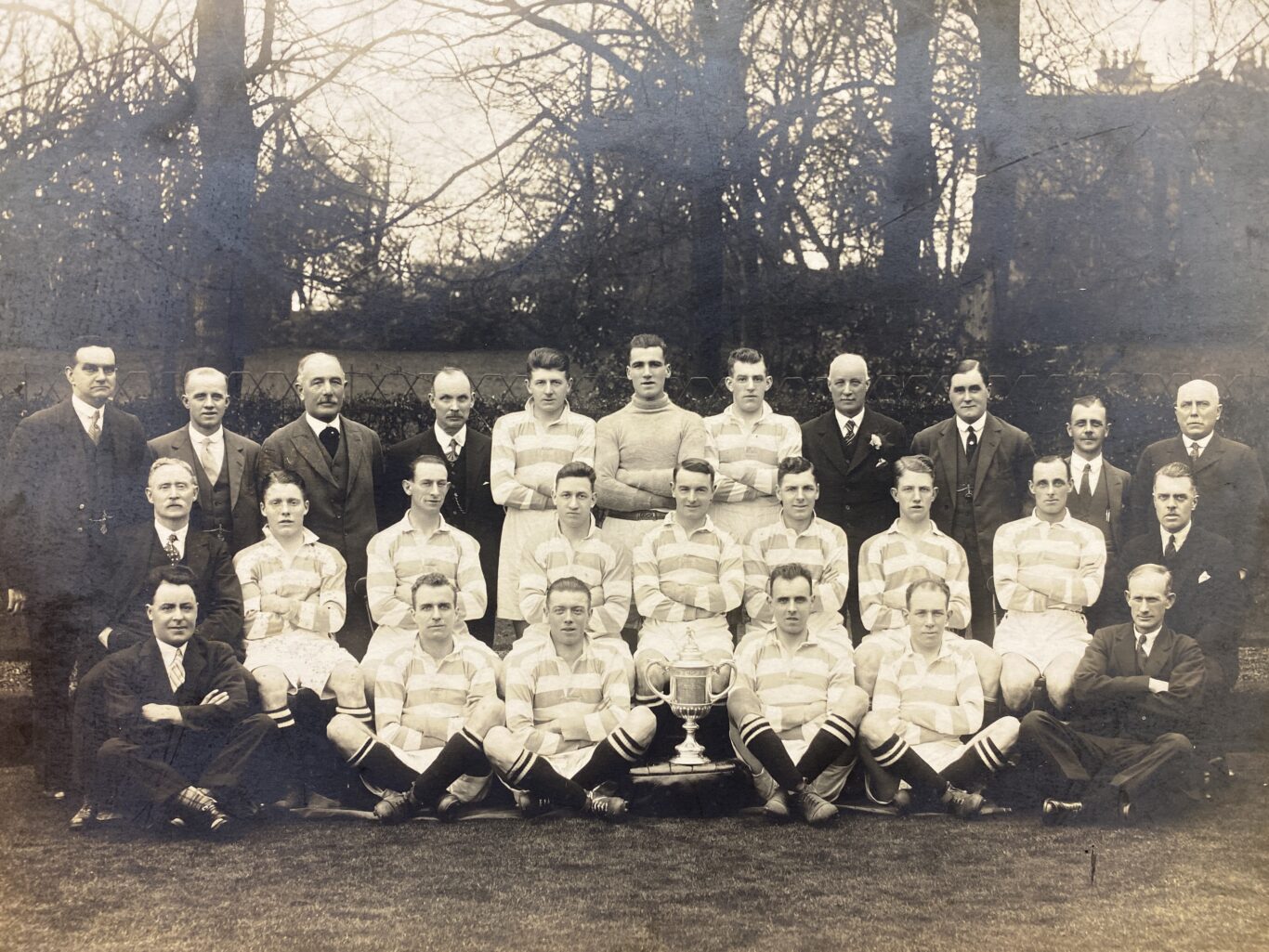 Welcome to the 13th installment of our Kilmarnock In History series, by club historian John Livingston.

For the first time in 12 years, Kilmarnock F.C. was the only Ayrshire club in the Scottish League Division 1, following Ayr United’s relegation at the end of the previous campaign. They began 1925-26 with a 2-1 home win over Queen’s Park, but a week later were trounced 8-0 at Easter Road by Hibernian.

Despite another bad away defeat – 6-1 at Falkirk – Kilmarnock went on to have a decent season, ending up in 9th place – the best finish since 1920. They also won more games than they lost (17-14) for the first time in 6 years, and took 41 points from 38 games played; with a record total of 79 goals scored (they actually lost 77 goals).

They beat Celtic 2-1 at Rugby Park and earned a creditable 0-0 draw at Celtic Park, but were beaten 5-0 at home by them in the 1st Round of the Scottish Cup. Centre forward Jimmy Weir set a new club record total of League goals in a season, scoring 26 times in just 30 League appearances, and the Kilmarnock reserves or “A” team as it was known, won the Ayrshire Qualifying Cup, beating Beith 8-2 (A 3-1, H 5-1) on aggregate in the Final.

A perimeter wall built at the Rugby Road end of the ground was nicknamed the “Bobby Rock Wall” by supporters as it was rumoured his transfer to Airdrieonians in February 1926 financed it!

Kilmarnock had a nightmare start to 1926-27, when on the opening day at home to Celtic, they lost two important players in forward Mattha’ Smith (broken leg) and centre half Jake Dunlop (knee injury).

Despite this, Killie were unfortunate to lose by only 3-2, but the injuries suffered proved to be long-term ones for both players. Smith missed the rest of the season, whilst Dunlop returned for a few games in October, but was clearly not fully recovered, and ended up missing not only the rest of the 1926-27 season, but the following season as well.

By the end of December, Kilmarnock had won only 4 of their 21 Division 1 fixtures, and were struggling near the bottom of the table with just 12 points. Manager-secretary Hugh Spence enlisted the services of a few players to help bolster the squad, including wingers John Murphy and Jimmy Thomson, and also enticed former inside forward Jimmy Ramsay back from Arsenal.

The eventual return of a few of the injured players, as well as the new faces, helped alleviate relegation worries, and Kilmarnock ended the season in 16th place with 32 points from 38 games, with Harry “Peerie” Cunningham ending as the clubs top League scorer with 19 goals.

In the Scottish Cup, a 3-1 home win over Peebles Rovers was followed by a disappointing exit in the 2nd Round at Dens Park in a midweek replay, Killie losing heavily by 5-1, after a 1-1 draw at home. The club were also invited in late April to play a Benefit game for former Cup winning right back Tom Hamilton, who had been sold to Preston North End in 1921. In a game watched by a “healthy crowd”, Kilmarnock lost 5-2 to the Lancashire club.

The 1927-28 season proved to be an eventful one for Kilmarnock despite suffering some heavy defeats during the League campaign, and they ended up in a respectable 8th place with 40 points from 38 games.

They lost badly in away trips to Celtic (6-1), Falkirk (6-0) and Dundee (7-0) – the last two on successive Saturdays in early November. They were also unbelievably beaten 7-1 at home by St. Johnstone in February 1928 – a result that ended an unbeaten run of 12 League and Cup games stretching back to the end of November!

A new club League goal-scoring record was set by Harry “Peerie” Cunningham, as he scored 34 goals in 35 appearances. For a number of years though, he was actually credited as having scored 35 goals, but this was eventually proven wrong, as a hat-trick credited to him in the 3-0 home win over Clyde on 19th November 1927 was only a double. The other goal scored was by another player called Harry Cunningham, who was on loan from Celtic!

In the Scottish Cup, Killie won away ties with Leith Athletic (3-2 at Easter Road) and Forfar Athletic (2-1), before losing 1-0 in a Quarter Final replay on a Wednesday afternoon at Hampden against Queen’s Park, watched by a 36,000 crowd. It followed a pulsating 4-4 draw at Rugby Park four days earlier, which was watched by a 22,261 crowd. In March 1928, right half Hugh Morton was in the Scottish League team beaten 6-2 at Ibrox by the Football League.

During the last five days of April 1928, Kilmarnock played four games in three different countries! They won the Ayrshire Cup, beating Beith 3-1 at Rugby Park in the Final on Wednesday 25th April 1928, and the following day beat Glentoran 2-1 in Belfast, Northern Ireland on the first day of a short four-day tour of Ireland. Moving down to the Irish Free State the next day, Friday 27th April, they lost 2-1 to Shelbourne in Dublin, before beating Fordsons F.C. 5-4 in Cork on Monday 30th April.

The following Saturday, 5th May, Kilmarnock won the Ayr Charity Cup, beating newly crowned Division 2 Champions Ayr United 7-6 on corners, after the game had ended in a 1-1 draw.

The 1928-29 season began with the resurrection of the Kilmarnock Charity Cup in August 1928, Kilmarnock beating newly promoted Ayr United 5-2 at Rugby Park. Mattha’ Smith was also credited with another Benefit game in September 1928, when Kilmarnock trounced Rangers 7-2 in front of a crowd of over 2,000. The inside forward had previously received a Benefit game against Ayr United back in early January 1922.

There were plenty of goals scored in Kilmarnock League games, proving they were an entertaining, but very inconsistent!

Full back Joe Nibloe set a club record of 132 consecutive League appearances, which was actually prematurely ended after a 3-2 win over Third Lanark on 9th February 1929. It had begun with a 3-1 defeat away to Dundee United on 24th October 1925, but it only ended because he was travelling reserve for Scotland against in Belfast on 23rd February 1929.

Entertaining, but inconsistent in the League, Kilmarnock proved resolute and determined in the Scottish Cup, as they ended the decade as they started it – as Scottish Cup Winners. It began with a comfortable 8-1 home win over Glasgow University in the 1st Round on 19th January, and was followed a fortnight later by a hard fought 3-2 home win over Bo’ness.

On 16th February, a tricky tie at Coatbridge against Albion Rovers was won 1-0 thanks to a Willie Connell goal, and in the Quarter-Finals on 2nd March, Raith Rovers were beaten 3-2 in a ding-dong battle at Stark’s Park.

However, injuries to Jake Dunlop (for the rest of the season), Harry “Peerie” Cunningham and Jimmy Ramsay meant they missed the Semi-Final on 23rd March against Celtic at Ibrox Park. Jimmy Weir and Jimmy Williamson came in up front, with Hugh McLaren, an Ayrshireman signed on loan from Aberdeen for only the Scottish Cup, lining up at centre half. A crowd of around 40,000 saw Jimmy Weir’s first half goal earn Kilmarnock a 1-0 win.

Already crowned League Champions and Cup holders Rangers were the opponents in the Final on 6th April.

There were a few blows before the Final, with both Jimmy Ramsay and Jimmy Weir injured against Clyde on the Monday, and Davie Paterson still out ill, having last played in the Semi-Final. 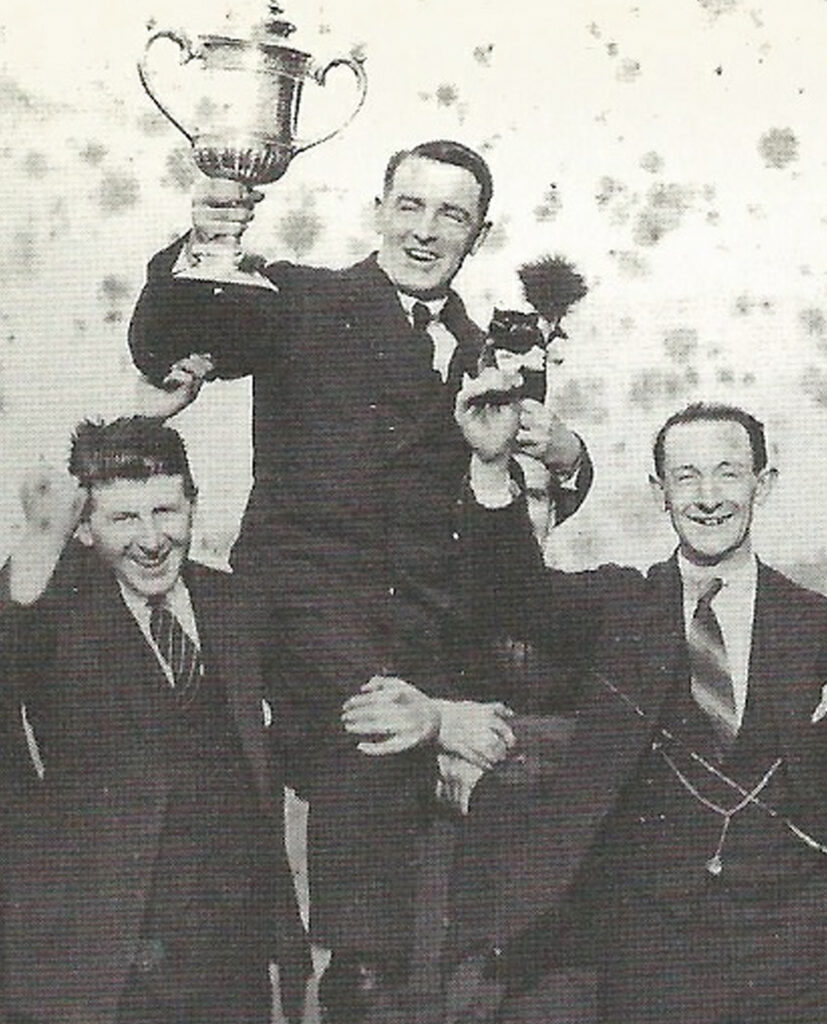 Before a Hampden crowd of 114,708 – the biggest ever attendance at a Kilmarnock game – Sam Clemie saved a Tully Craig penalty before goals by the two reserve players, Jimmy Williamson and Jock Aitken gave Kilmarnock a deserved 2-0 win.

The Rangers wing half Jock Buchanan became the first ever player sent off in a Final in the closing minutes of the game. The following Saturday, Joe Nibloe made his full International debut as Scotland beat England 1-0 at Hampden.

A short trip to Northern Ireland on the last couple of days in April saw Killie earn a 1-0 win over Ballymena, but lose 1-0 to Glentoran, and then at Rugby Park on Wednesday 8th May, they beat Ayr United 2-0 in a replay of the Kilmarnock Charity Cup, having previously drawn 1-1 on the Saturday.

Kilmarnock in History: The rise of James 'Bud' Maxwell