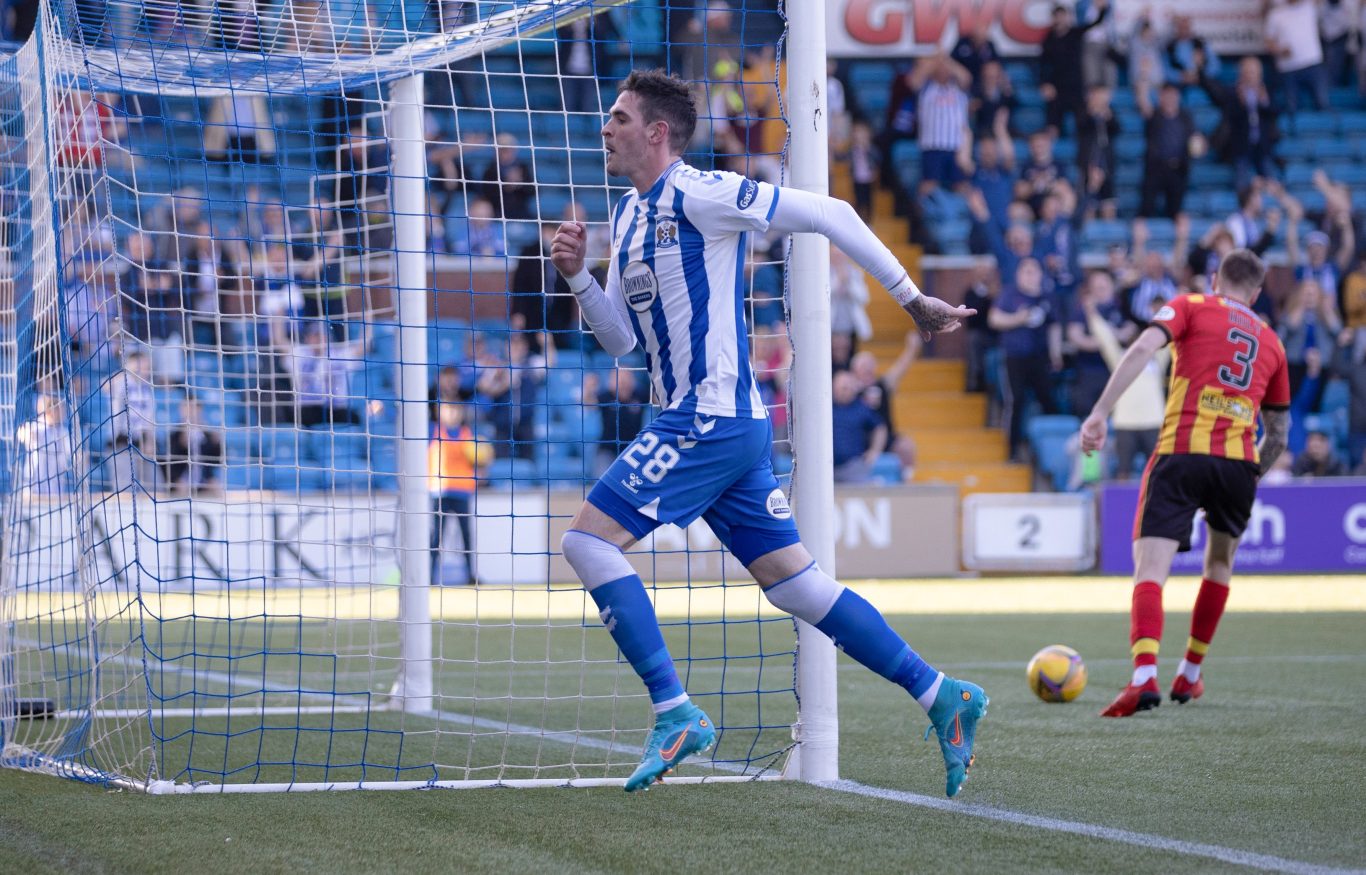 Two Kyle Lafferty goals inspired Killie to a crucial 2-1 home win against Partick Thistle as we extended our lead in the cinch Championship to four points.

A first-half free kick and goal seconds in the second period from the striker saw Derek McInnes’ men record a fourth consecutive league triumph and with Arbroath drawing 3-3 with Raith Rovers, we continue to push towards promotion with five matches of the campaign to go.

Thistle entered the match having lost their last three matches but they started the brighter with Juan Alegria and Scott Tiffoney going close with efforts.

There was real concern in the home crowd when Kyle Lafferty went down after a bump in the back from Tuni Akinola but after treatement the Northern Irishman was able to continue.

And just as well as moments later, another foul from Akinola on Lafferty earned the defender a booking a gave our forward the chance to fire at goal from 25 yards out.

Lafferty took the opportunity with relish, unleashing a whipped, curling free kick past the dive of Sneddon to the delight of the home support.

There were no shortage of meaty challenges flying in from both sides as referee Willie Collum was kept on his toes in the first 45 minutes.

Kevin Holt squandered a fantastic chance to draw Thistle level as he angled his header wide from a corner before colliding with the post afterwards.

Having survived that scare, Killie wasted no time in doubling their advantage just 19 seconds after the restart.

Stephen McGinn helped win the ball back in midfield and he fed Rory McKenzie, who produced a wonderful clipped pass into Lafferty’s path. Having evaded the attention of Akinola, Killie’s number 28 made no mistake with the finish past Jamie Sneddon to give Killie a cushion to hold onto.

A chance at a hat-trick wasn’t to come to pass while Ash Taylor saw his header come back off the crossbar as the home crowd began to enjoy their football.

With a two-goal cushion, Brad Lyons, Chris Burke, Declan Glass and Dan MacKay were all introduced to the action to see the match out and it looked to be heading to a comfortable conclusion before Thistle pulled one back with five minutes left.

A corner from the left found a way in through Ross Docherty to set up a nervy finale as the crowd waited for Willie Collum to blow his whistle. The visitors swung the ball into the box into a late attempt to find what would have been a devastating equaliser but the home side held on for what could be a very important victory.