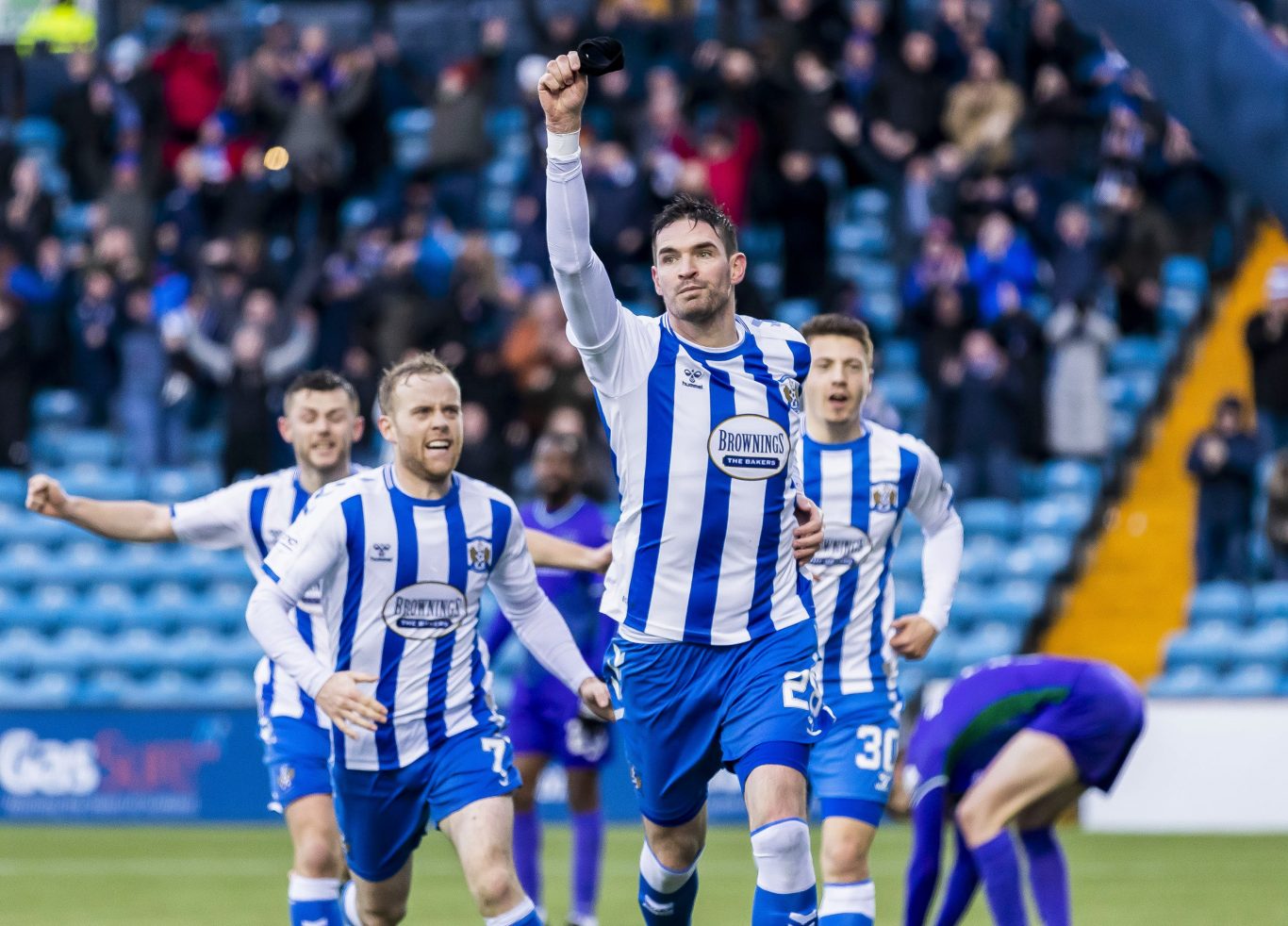 On an emotional day at Rugby Park, the Northern Irishman fired in a second-half brace to turn the match in the home side’s favour and ensure we moved to within two points of leaders Arbroath after playing one game more.

Before kick off, Rugby Park fell silent to pay tribute to supporter Colin McCue, who tragically passsed away around the stadium grounds following the midweek derby match with Ayr United.

When attentions could turn to football, there were four changes to the  starting XI with Euan Murray and Calum Waters slotting into a back four whilst Stephen McGinn and Blair Alston returned to midfield.

Fraser Murray’s goal was a rare bright moment on Wednesday and the winger went close inside the first three minutes of this encounter, forcing Jakub Stolarczyk into a save at his near post.

Killie’s hopes in front of goal largely rested on Kyle Lafferty’s shoulders. The Northern Irishman saw one backhell flick held by the Pars goalkeeper moments after the attacker had been booked for catching Efe Ambrose in the face with his arm.

Refereee Craig Napier was a busy man as he awarded the visitors a penalty for handball against Fraser Murray from Coll Donaldson’s free kick.

Steven Lawless stepped up but as many attackers have this term, he was denied by the diving Zach Hemming, who palmed the ball to safety.

With the visitors happier with their first half showing, the Killie manager responded with the introduction of Chris Burke for Dean Campbell and the winger made a difference in the second period.

On the other flank, Fraser Murray created a fantastic opportunity for Blair Alston and the midfielder somehow dragged his effort wide.

It appeared that miss would be costly when Dunfermline took the lead 58 minutes. The Pars worked the ball well down the left and the cross was tapped high into the net by the onrushing Lawless, who made up for his penalty miss.

Alston was another man keen to make amends and he certainly did that in an all-action display. Our number eight chased a long pass and robbed Efe Ambrose of the ball before squaring for Lafferty to sweep home to draw Killie level on 67 minutes.

The goal gave the hosts fresh life with every ball cheered by the Killie support.

Aaron Comrie had already been booked when Calum Waters’ cross appeared to strike the defender’s arm but referee Craig Napier waved away those penalty claims with Stephen McGinn earning a booking for his protest.

Killie were not to be denied though as McGinn whipped a cross into the box and as the ball hung in the air, Lafferty leapt into the air and executed a wonderful overhead kick to leave Jakub Stolarczyk with no chance.

Lafferty celebrated while holding the black armband in memory of Colin McCue aloft to the crowd to mark the moment.

Where McInnes had been disappointed with the reaction of his players in the final stages in midweek, this afternoon he saw players in blue and white flying into tackles to protect their precious lead. Rory McKenzie threw his body to win one challenge inside his own half and as frustration got the better of Comrie, the Dunfermline man earned a second yellow card in the final minutes.