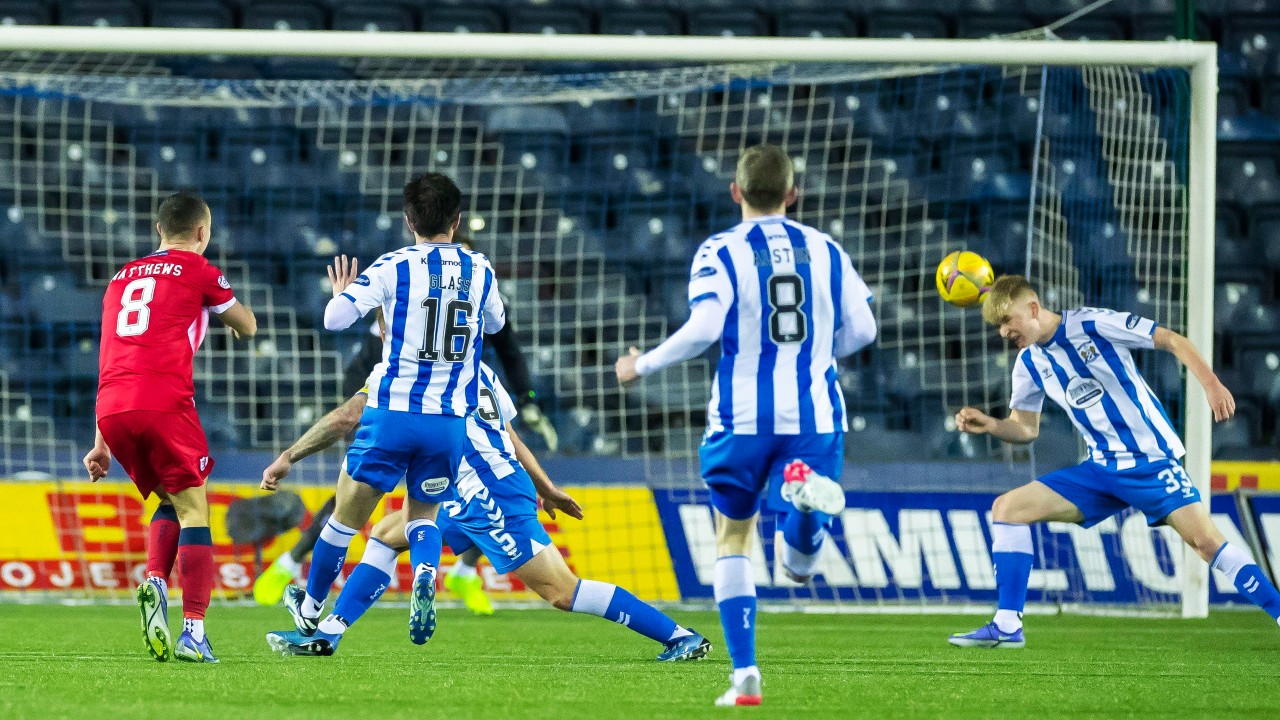 Killie’s SPFL Trust Trophy journey came to an end at the semi-final stage as Raith Rovers came from behind to win 2-1 and book a meeting with Queen of the South.

Oli Shaw’s first half penalty gave Killie the lead but goals from Ross Matthews and Aaron Arnott saw the Fife side earn the right to try and retain the trophy.

It was yet more home disappointment for Killie who saw captain Chris Stokes and winger Daniel MacKay forced off with injuries.

Sam Walker was named in goal and he made an impressive early save to deny Dario Zanatta, pushing the Raith attacker’s ambitious strike off the crossbar.

It was a busy opening for both goalkeepers as Daniel MacKay burst through the Raith defence two minutes later only for Jamie MacDonald to stand tall and push his effort away.

With much of the play taking place in the air, there were numerous nasty clashes which resulted in both medical teams entering the field throughout the half.

Blair Alston and Ben Williamson clashed heads before Varian earned a booking for catching Chris Stokes in the face with his elbow. Stokes would end the first half covered in blood aafter another altercation with the forward as their heads clashed in injury time.

While attacking football was at a premium, Killie did manage to take the lead on 43 minutes.

Zanatta brought down Jason Naismith in the box and Oli Shaw stepped up to send the ball through Jamie MacDonald’s fingertips.

In first half injury time, Stokes’ head clash with Varian left the Englishman in clear pain with a trip to hospital required. Charlie McArthur emerged for the start of the second half in his place and would put in another strong showing.

Shaw went close to grabbing a second while Declan Glass dragged a shot wide from inside the area and the home side would be made to pay for those misses.

Blair Alston lost possession in midfield and Ross Matthews was allowed to travel deep into Killie territory with the ball before dispatching a shot into the corner past Sam Walker.

Ben Williamson, who had already been booked, was involved in the winning goal, going down in the box under the attention of McArthur. Replays suggested the Raith player had fouled McArthur in the build up before referee Grant Irvine pointed to the spot.

Walker saved the initial effort but substitute Aaron Arnott was on hand to score the rebound off the bar.

Fraser Murray had one final chance to take the tie into extra time but he couldn’t convert from Shaw’s cutback as Raith celebrated reaching another Trust Trophy final.