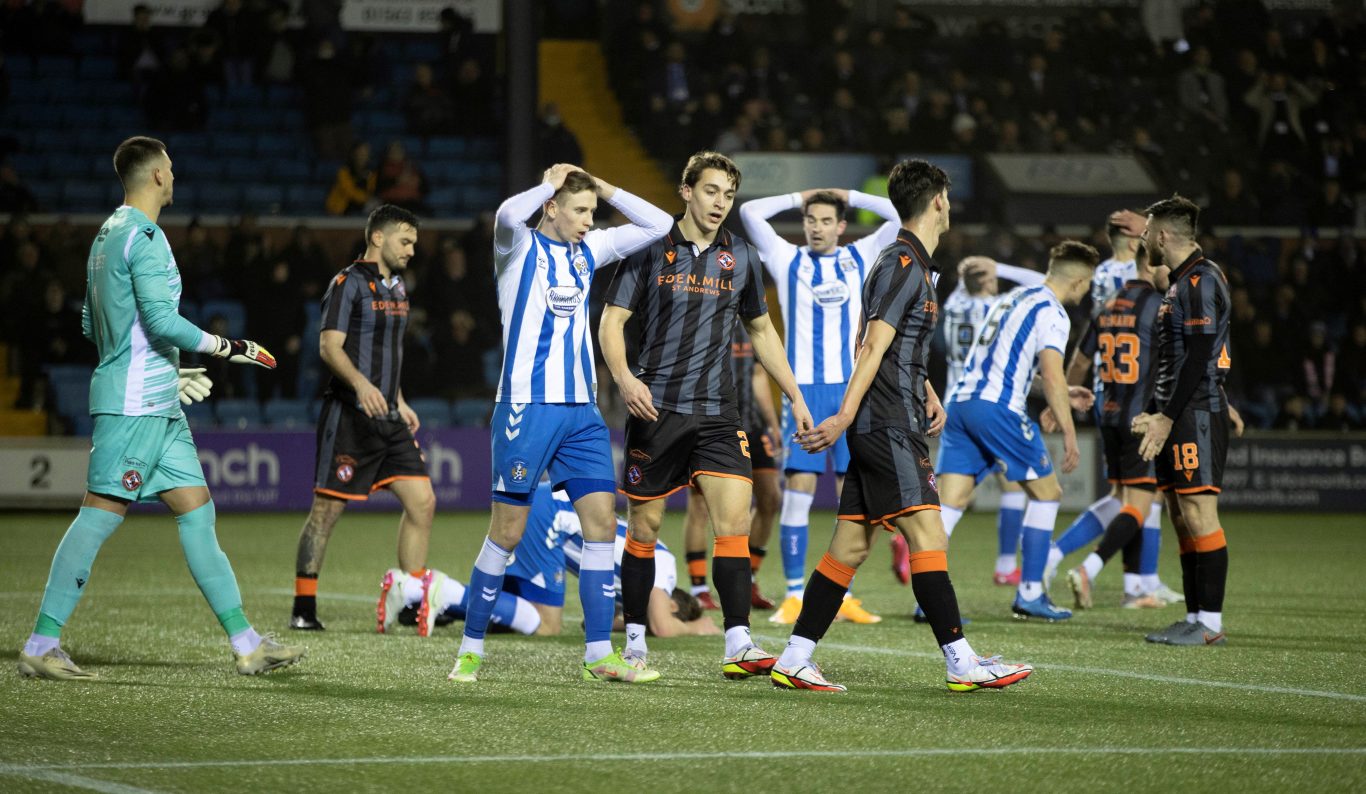 Killie’s Scottish Cup journey came to an end following a 2-1 defeat after extra time to Premiership side, Dundee United but Derek McInnes and the home supporters can take plenty of heart from this display.

Dylan Levitt struck in the 110th minute to ensure United’s progress to the fifth round after a frantic opening 20 minutes saw Marc McNulty and Rory McKenzie trade goals.

On his debut in the dugout, Derek McInnes saw his boys in blue and white play with the intent, tempo and phsyical edge that got the Rugby Park fans off their seat in a fully committed performance.

Dylan Tait came into the side following his loan arrival from Hibs and his Easter Road team-mate Daniel MacKay was also handed a spot in the starting XI.

Killie barely had time to get going when United’s 1,500 fans had something to cheer from the Chadwick Stand.

Scott McMann’s long ball beat the Killie offside trap and he prodded the ball in off the post past Zach Hemming to give Tam Courts’ team the ideal start.

Ash Taylor was a constant threat from set plays for Killie and he forced Benjamin Siegrist into a fine save to his right as the Swiss ace punched the ball clear.

The hosts were level after 19 breathless minutes. Chris Stokes played the ball up to Oli Shaw and the forward’s clever headed flick played in Rory McKenzie.

His initial effort was saved by Siegrist but there was nothing the United goalkeeper could do with the follow up as our number seven found the net.

Fraser Murray and Daniel MacKay both tested the United defence while a slip from McMann allowed Shaw in on goal but he dragged his effort wide of the post.

Captain Stokes was forced off with a tight groin injury just before the interval with Euan Murray taking his place at the heart of the defence beside Taylor and the recalled Jack Sanders, free after serving a two-match league suspension.

In an attempt to win the match, McInnes turned to Kyle Lafferty on 52 minutes with the returning forward keen to make an instant impression on his Rugby Park return.

But it was Taylor from corner kicks who posed Killie’s best threat with Nicky Clark doing enought o clear off the line following another powerful header from the centre back.

Siegrist palmed a swerving Alston shot out before another Taylor attempt went wide as the home men pushed to finish the tie off. Instead it was almost United’s game as sub Ilmari Niskanen struck the post with five minutes of normal time left.

United’s Premiership quality wasn’t often evident but some quick feet ensured they came out on top in this contest.

Dylan Levitt, on loan from Manchester United, showed great balance to drive into the box and his effort found the net to leave Hemming helpless.

One final push saw McKenzie, Burke and Fraser Murray denied in the closing stages but Killie just couldn’t force the ball over the line and so their cup dream ends for another season.

The fans stayed to applaud the players’ efforts and it is that collective apprecitation which could prove to be so vital as we head towards the closing stages of our promotion push.