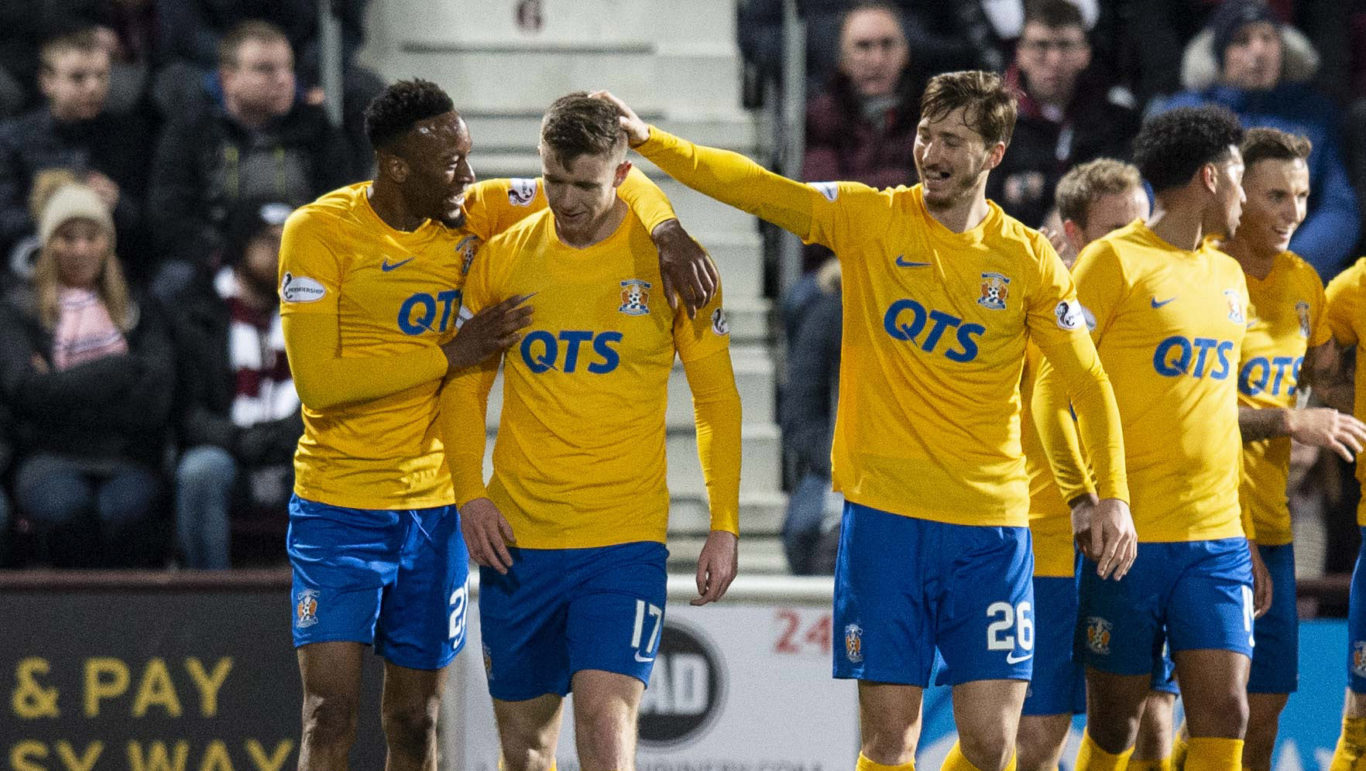 Killie made it two wins on the bounce, and three from three at Tynecastle, after defeating Hearts under the lights in Edinburgh.

With no changes made to the team saw off Ross County at Rugby Park the previous weekend, Killie had a stern test under the lights in Gorgie against a Hearts side enjoying a recovery in form under Daniel Stendel.

Roared on by the home support, Hearts landed the first punch as they flew forward with breathless fury – twice forcing a corner and then a Craig Halkett save from Larry Branescu as Marcel Langer pulled the strings from the wide areas.

Killie did well to weather the early maroon storm, with Rory McKenzie calling on a fingertips save from Joel Pereira after smashing a powerful volley goal wards from a loose ball.

Hearts had placed Killie under pressure with their high pressing, but it was Alex Dyer’s men who raced into the lead after 23 minutes: Eamonn Brophy cleverly beating the offside trap before forcing a corner from his forward drive, Stuart Findlay hammering home the resulting delivery with a sweet header.

That was a man who loves a goal in that part of Edinburgh, with Killie now rising with confidence to challenge to the initial Gegenpressing onslaught and force the game back into a midfield battle.

Another man who loved a goal at Tynecastle was Chris Burke: and he was next to make his mark. With 37 minutes on the clock, Chris Burke showed the wealth of experience under his belt as he coolly lifted a Brophy long ball over Pereira to send Killie fans in the Roseburn Stand wild.

It was a half of fantastic football after surviving a testing early start, with another 45 required to ensure all three points would be coming back to Ayrshire.

You had to wonder what kind of reaction there would be as the teams emerged for the second 45, but Killie kept that relentless intensity up.

With just minutes on the clock following the restart, Eamonn Brophy slammed home a magnificent mid-range strike after being slipped inside the area with a delightful O’Donnell ball.

Killie kept it tight after getting their third: largely restricting Hearts for vast chunks of the game as we looked to solidify our grip on the result.

A lack of communication between Branescu and defence saw a penalty awarded after he rushed to halt an coming Conor Washington, with Sean Clare converting the resulting effort.

The situation was worsened after Branescu was handed his marching orders for a scuffle in the aftermath, with the keeper having already been on a yellow for fouling Washington.

Hearts turned up the heat as they battled hard for a way back into the match, with a Craig Halkett goal and five minutes of additional time to play ensuring it was going to be nerve-shredding end to the match.

There was to be no late heart-break however, and Killie claimed the points.