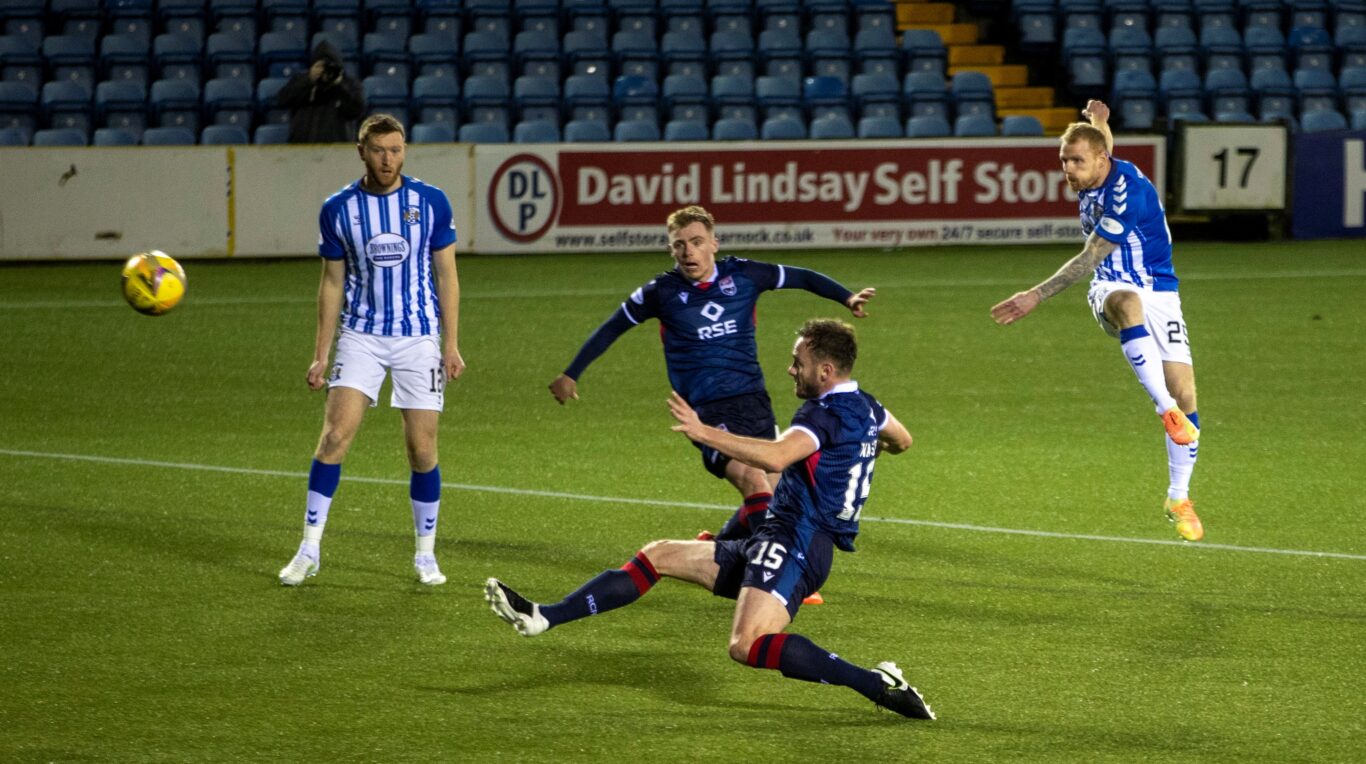 Mitch Pinnock claimed the prize this week for providing the assist for Eamonn Brophy’s opener as well as winning the penalty to re-establish our advantage.

It was set up to be a big afternoon in Ayrshire with the Scottish Premiership table looking tight going into some crucial match ups.

Following two Betfred Cup victories, Aaron McGowan, Brandon Haunstrup and Eamonn Brophy kept their places in the team with the full backs accompanied by Kirk Broadfoot and Stuart Findlay in the Killie backline.

That line up didn’t last long as referee Colin Steven showed a straight red card to Stuart Findlay after only eight minutes, claiming the defender had brought down County captain Ross Stewart.

The centre back protested against the decision, insisting he got the ball cleanly and replays appeared to back up that view.

Undeterred Killie duly took the lead five minutes later as Mitch Pinnock crafted a beautiful cross for Brophy to plant his header firmly into the net. It was a second goal in as many games for our number 9, who duly produced his trademark Wolf celebration in delight.

County were keen to try and make the most of their numerical advantage and they tried to put moves together through Reegan Charles Cook in search of an equaliser.

Despite the hosts keeping them at bay for large periods, the goal duly arrived when a quick corner saw Kelly cross for Tom Grivosti, who found himself in acres of space to head home before the break.

Seeing the way the match was going, a halftime switched followed with Brophy coming off and Zeno Ibsen Rossi slotting in at centre back to allow skipper Gary Dicker to return to his regular central midfield position.

Both sides tested the respective goalkeepers before the men in blue and white were handed an opportunity to push ahead once more. Kabamba’s ball to the near post wasn’t fully cleared and as Pinnock went to retrieve the loose ball, Coll Donaldson made a clumsy tackle to bring him to the floor.

Kabamba stepped up to send Ross Doohan the wrong way and suddenly there was a lead to maintain for the final stages of the match.

An outstanding save from Danny Rogers to deny Josh Reid was worthy of winning any match and substitute Chris Burke ensured that all three points were staying here with a wonderful solo goal.