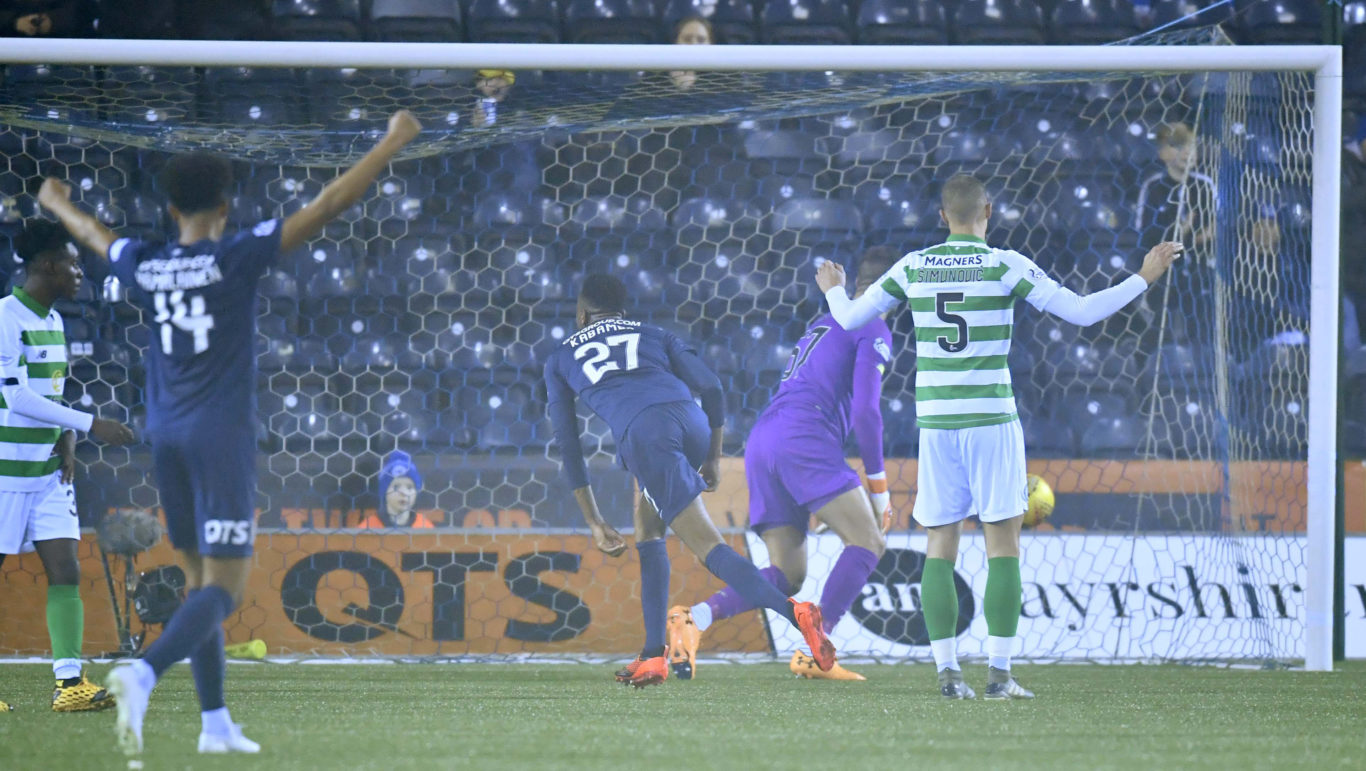 A second Nicke Kabamba goal in as many matches wasn’t enough for Killie, as Celtic scored three to ensure that our first league match of 2020 ended in defeat.

There was just one change to the side that routed Queen’s Park in the Scottish Cup: Greg Kiltie dropping to the bench in favour of Nicke Kabamba, fresh from scoring on his debut against the Spiders.

The two sides clashed fiercely in the opening exchanges, both sides revved up under the Rugby Park lights as Premiership action resumed.

Celtic moved with their trademark fluidity, enjoying two good chances inside eight minutes as they probed for an opener: Jan Koprivec pulling off an athletic save to deny a Jozo Simunovic header from a pin-point Griffiths delivery.

It took the massive hands of Fraser Forster to keep Killie at bay as Alex Dyer’s men responded: Nicke Kabamba going close before a crucial Celtic touch denied him a second goal in as many matches.

The visitors made their breakthrough after 25 minutes: a searching cross from the feet of Frimpong picked out the electric figure of Odsonne Edouard, who escaped the attention of Alan Power before tucking the ball home.

Killie bit back, refusing to let the initial setback affect confidence: a Bruce header that flashed over the crossbar coupled with a teasing Hamalainen cross that narrowly evaded Chris Burke at the near post, was testament to that.

Those first-half efforts didn’t bear fruit though, and it was to take another 45 minutes to see if they could take the game to Celtic.

The men from Glasgow hit Killie with a rapid sucker punch though, Leigh Griffiths blasting them into an early lead – a Callum McGregor pass picking out the forward at the front post, taking a touch to shift it onto his left foot before firing past Koprivec.

Killie got their heads back in the game though, lashing out with a punch of their own as new boy Nicke Kabamba steered home a powerhouse Alan Power effort with a clever diving header with 66 minutes on the clock.

It was a good move, but Celtic moved quickly to reassert their lead after 73 minutes -good movement from Griffiths won Celtic a corner and, from the resulting delivery from the Scotland striker, the towering figure of Christopher Jullien leapt up to thump home the visitor’s third of the night.

Killie couldn’t quite make another breakthrough after that, and now look ahead to this weekends trip to Perth to face St. Johnstone.