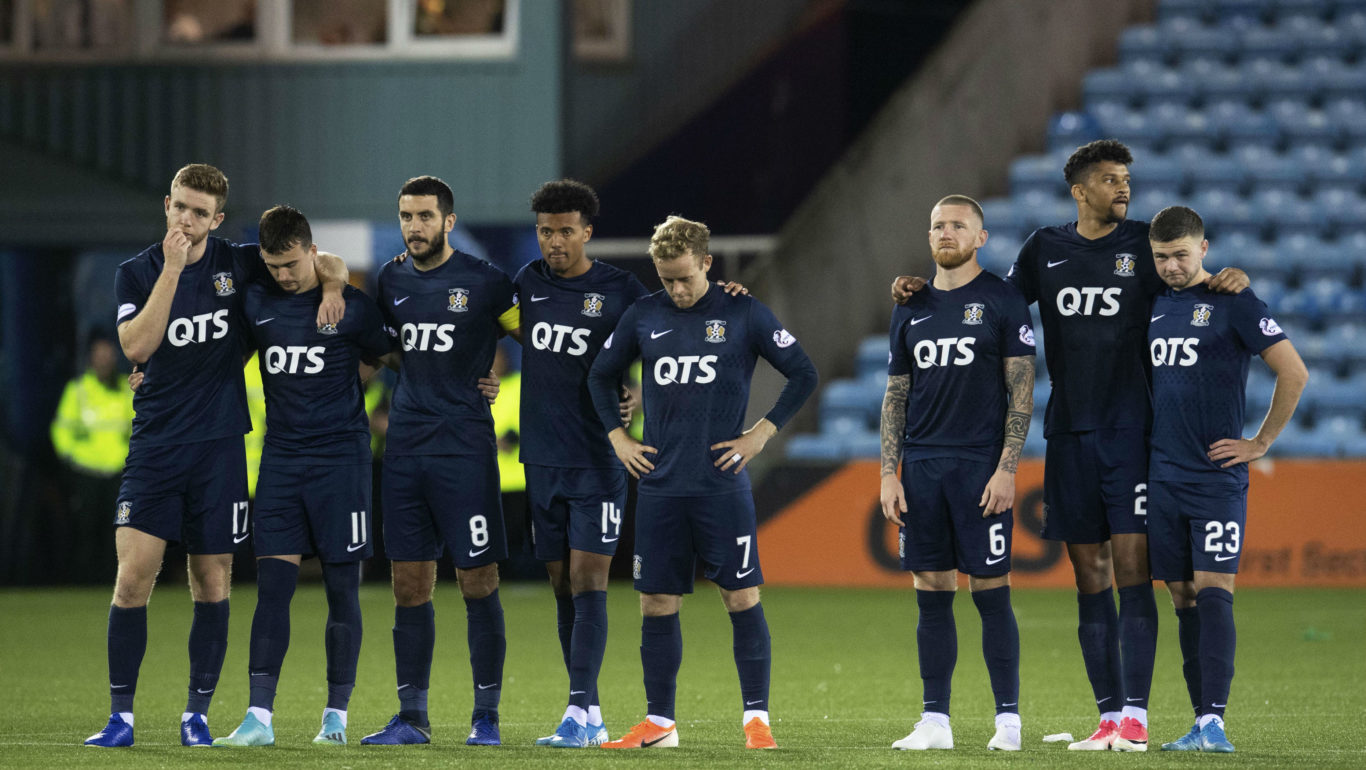 Kilmarnock bowed out of the Betfred Cup this evening after being edged out by Hibs 5-4 in the penalty shoot-out.

A dour game of football gave way to extra-time, with Joe Newell’s effort from the spot sealing the win for the visitors after Niko Hamalainen and Stephen O’Donnell had failed to convert from 12 yards.

Plenty of movement on the ball, but a toothless attack at both ends proved to be a killing blow to the hopes of any first-half goals.

And as Willie Collum’s whistle brought proceedings to a close, fans could only hope that the second-half would offer up something a bit more exciting.

The second-half begun as Harvey St. Clair briefly troubled Chris Maxwell in the Hibs goal with an effort from wide left, whilst Chris Burke entered the book for a challenge on Josh Vela in a mostly forgettable spell.

A phenomenal turn of pace from substitute Liam Millar saw the Canada international crash into the box ten minutes from time before being brought down by the Hibs defence – nothing but a shake of the head from Collum was given.

There was to be no further action as proceedings came to a close: it was going to extra-time.

Almost straight from kick-off, Dom Thomas flew down the right like a man possessed – his resulting pop at goal battered the crossbar as the Killie support howled for more.

Hearts leapt into mouths at a Killie corner: Del Fabro turned and got a touch on the ball in the area but couldn’t blast it beyond Maxwell.

Tempers flared after Ryan Porteous was sent off for a horrible tackle on Liam Millar: cutting down the flying winger with a cynical kick to snuff out a promising attack. The resulting free-kick was headed just wide of goal by Stephen O’Donnell.

Still no goals: this was a game that was going the distance as Willie Collum signalled for penalties to decide a winner.

Dom Thomas then followed up to make it 2-1, with Mallan equalising to take it to 2-2.

Liam Millar was cool as a cucumber to roll it past Maxwell to make it 3-2. Branescu stretched well, but couldn’t stop Hanlon from scoring the next.

Killie had a miss of their own at 3-3, Stephen O’Donnell turning the ball off the post. Tom James followed up to make it 3-4.

McKenzie kept it alive, scoring to make it 4-4: Joe Newell kept it going for Hibs at 5-4.

Niko Hamalainen couldn’t convert the next penalty, and Hibs secured the win.