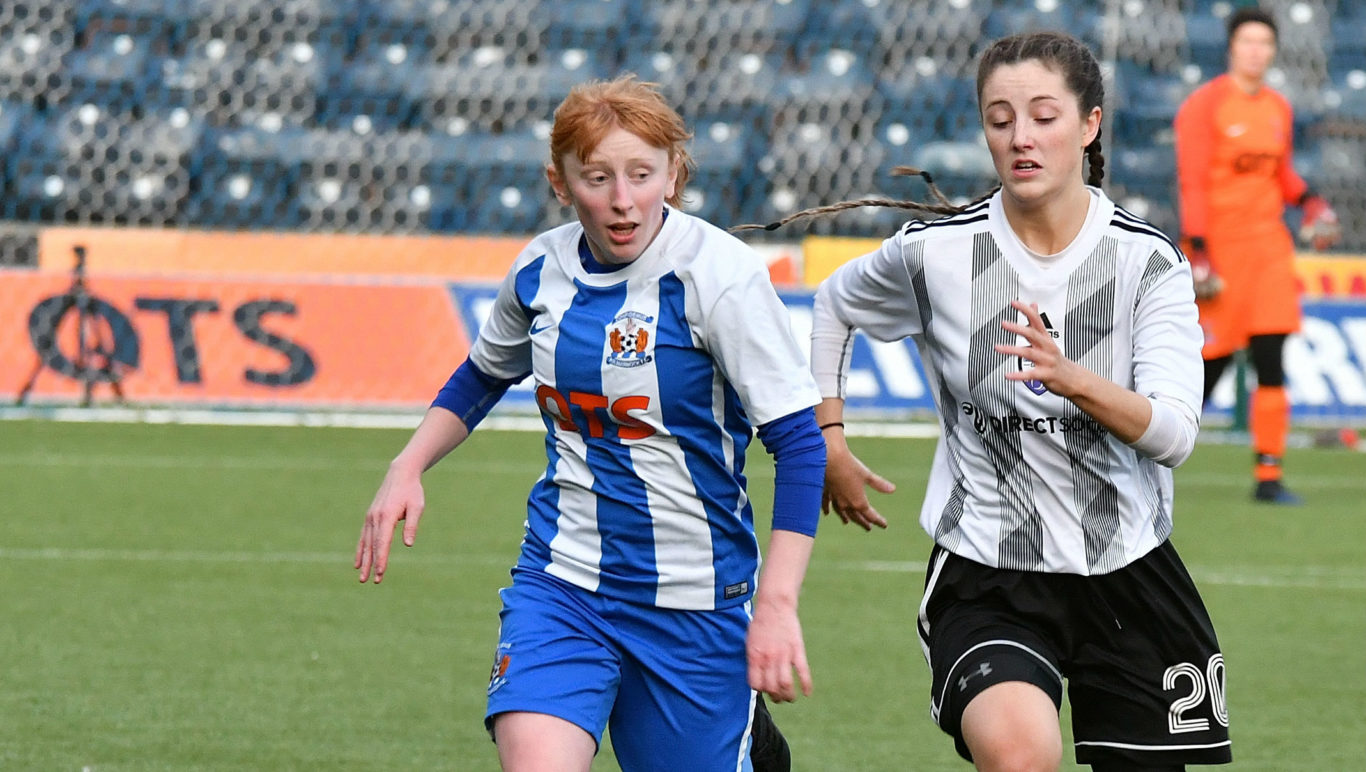 Killie edged out in six-goal thriller at Accies

FC Kilmarnock Ladies fell to a 4-2 defeat against title-chasing Hamilton Accies in an entertaining and competitive SWPL2 encounter in Lanarkshire.

Abby Robinson (pictured) gave Killie the lead before a double from Dionne Brown and a goal on the stroke of half time helped nudge Accies ahead. Substitute Lisa Swanson gave Killie hope before a stunning strike from Nichola Sturrock killed off their chances.

Killie came into the game hoping to leapfrog Partick Thistle into third place while Accies knew three points were vital to keep the pressure on league leaders Hearts.

Coach Stewart Hall set his side out with Suzanne MacTaggart playing as the lead striker, supported on the flanks by Robinson and Kirsty Munro with captain Clare Docherty keen to burst through the midfield whenever possible.

Killie fullbacks Kim Murphy and Aimee Docherty were tested in the early stages with both Chloe Muir and Megan Quigley looking to attack at every opportunity.

But Hall’s team soon settled and started catching Hamilton on the counter attack and it was no shock when they took the lead. From a throw in, Colette Fleming played a wonderful through ball, which Abby Robinson latched onto and cooly slotted past Lauren Grant in the Accies goal.

Sadly, the lead wouldn’t last long as Dionne Brown unleashed a rasping drive, which flew past the fingertips of Lauren McGregor and into the corner of the Killie net. Robinson went close to restoring Killie’s lead with a smart run at the back post from a free-kick but her effort went narrowly wide of the post.

Just as Hall would have been preparing his team talk for the interval, his notes would have been ripped up as his team conceded from a corner kick with Accies scrambling the ball home from inside the six-yard box.

More frustration would follow early in the second half as Hamilton extended their lead as Lisa Swanson prepared to enter the field in place of Kim Murphy. Before the switch could take place, Dionne Brown beat Murphy to a loose ball down the Killie left and the Accies number nine powered into the box before dispatching a fierce effort into the roof of the net.

If the hosts thought the match was over then they were quickly made to reconsider as Killie sub Swanson made an immediate impact. Controlling Kirsty Munro’s cross from the right wonderfully, she then delivered a deadly accurate snapshot into the corner to haul Killie right back into the contest.

As the dogged and determined Killie players fought bravely to find an elusive equalising goal, Accies went and delivered a final blow of outstanding quality, fit to win any match.

There appeared to be no danger when Nichola Sturrock picked up the ball 35 yards from goal but everyone in the ground was mistaken as Hamilton’s number 10 produced a terrific, arching shot which found the very top corner and left McGregor utterly helpless.

The result leaves Killie level on points with Thistle in the battle for third having played one more game while Accies are just three points off the top of the table with three rounds of games to go.

Killie host leaders Hearts at Rugby Park on Sunday (October 27) with kick off at 4pm.