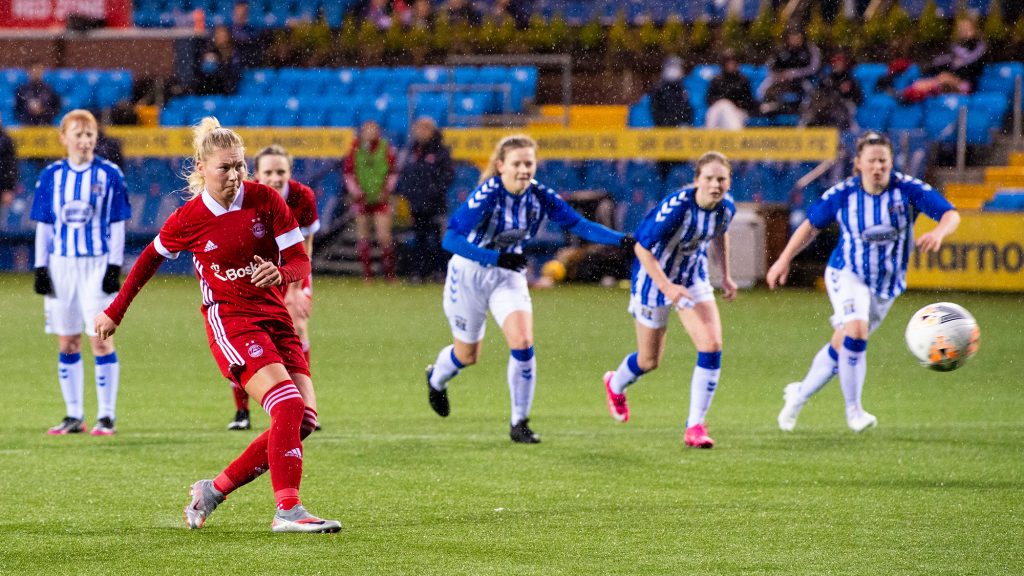 Killie Women signed off 2020 with a 5-0 defeat to SWPL2 leaders Aberdeen at BBSP Stadium, Rugby Park.

On a rain soaked, and at times controversial, afternoon in Ayrshire, Killie were undone by a ruthlessly efficient Dons side that moved seven points clear at the top of the table.

A harsh second half penalty saw Killie judged to have handled in the area. Killie keeper Morgan Hunter produced an initial save. The linesman flagged against her for coming off her line too soon, with Aberdeen converting at the second time of asking.

“For me it is not a penalty, she has gone to kick the ball and it has come up and hit her hand. You see it every single week. We save the penalty then the linesman flags because he said her feet came off the line,” said Head Coach Andy Gardner

“Our game plan was to frustrate them and keep things tight. I think it was frustrating to lose a goal so early, but the girls did grow into the half and really frustrate them.”

It was always going to be a big test against an Aberdeen team that have only known defeat once this season, and after Eilidh Shore rose to power home an almighty header after just three minutes – it looked set to be dispiriting afternoon.

At the other end of the park, Morgan Hunter’s experience came into play as Aberdeen took control of the game. Bayley Hutchison made gains on Killie territory and sliced the defence open with a tidy pass to Shore, with Hunter displaying great speed to get down and smother the ball.

Even with backs against the wall, Killie kept going and Gilmour had to produce a stretching save to deny a Shelley Campbell free kick on the cusp of half time.

The visitors doubled their lead on 53-minutes. A searching ball down the left by Jessica Broadrick saw the defender cut inside before putting a shot high into the Killie net.

Andy Gardner’s side were left fuming at a controversial penalty call which saw the referee award for hand ball.

Francesca Ogilvie stepped up and saw her spot kick saved by Hunter, the linesman was unhappy though and immediately flagged after the Killie keeper was judged to have moved off her line too soon.

Ogilvie stepped up once more and fired the retake into the net to make it 3-0.

Sub Rebecca Galt came close to pulling one back, finding herself in space in the box but she fired her first time shot straight at Gilmour who collected.

With the wind truly knocked out of Killie sails, Bayley Hutchison extended the visitor’s lead after she sent a powerful shot into the net from just outside the box.

The Dons added another deep in stoppage time. Hannah Innes winning a penalty on the left side of the area as Lauren Gordon was on hand to tuck the ball home and round off the scoring, and the year in SWPL2.