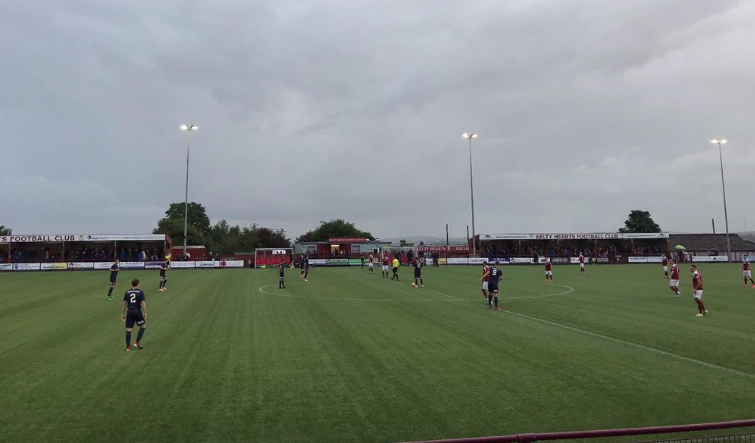 Kilmarnock Reserves bowed out of the Tunnock’s Caramel Wafer Challenge Cup first round after an experienced Kelty Hearts side claimed a 4-0 win at New Central Park.

On their own turf, Kelty zipped the ball about well, combining technical ability and physicality to keep the youngsters thinking.

With less than ten minutes on the clock, Killie had their first big moment of the match after captain Ewan McLevy dived across the face of goal to stamp out a dangerous Kelty move sparked by Ross Philip, the striker closing down on Curtis Lyle.

The big ‘keeper was soon called into action after another Philip move teed up Ross Mutch who let off a low strike at Lyle – who promptly responded by pushing away the ball.

Kelty had another big chance on 15 minutes, a sweeping attacking move saw the home side break down the pitch with Ross Mutch getting a header off.

Nathan Austin looked hungry for Kelty, curling a fine effort from the edge of the box at Curtis Lyle, with the ball just whizzing past the post.

Murray Carstairs bagged the opener after 25 minutes, collecting a low Husband free-kick before blasting into the roof of the net – Lyle got a hand to it, but couldn’t stop it.

Craig Ross had Killie’s best chance on the stroke of half-time, seeing a stunning 30-yard free kick tipped over the bar. The following corner was to no avail but the reserves kept plugging away.

Kelty showed their experience, grabbing their second on 37 minutes as Nathan Austin tapped home on the rebound following an initial Austin effort.

Into the second-half and goal number three soon arrived, Ross Mutch went one-on-one with Lyle before tucking the ball home.

With 509 fans inside the ground, there was a good contingent from Killie. As the tempo slowed down, the Killie reserves started to grow back into things as they came to grips with Kelty’s style of play.

Ten minutes from time, Kelty had their fourth. A foul on Nathan Austin on the edge of the area saw a free-kick awarded, with defender Scott Linton putting away the resulting effort to wrap up the win for the home side.