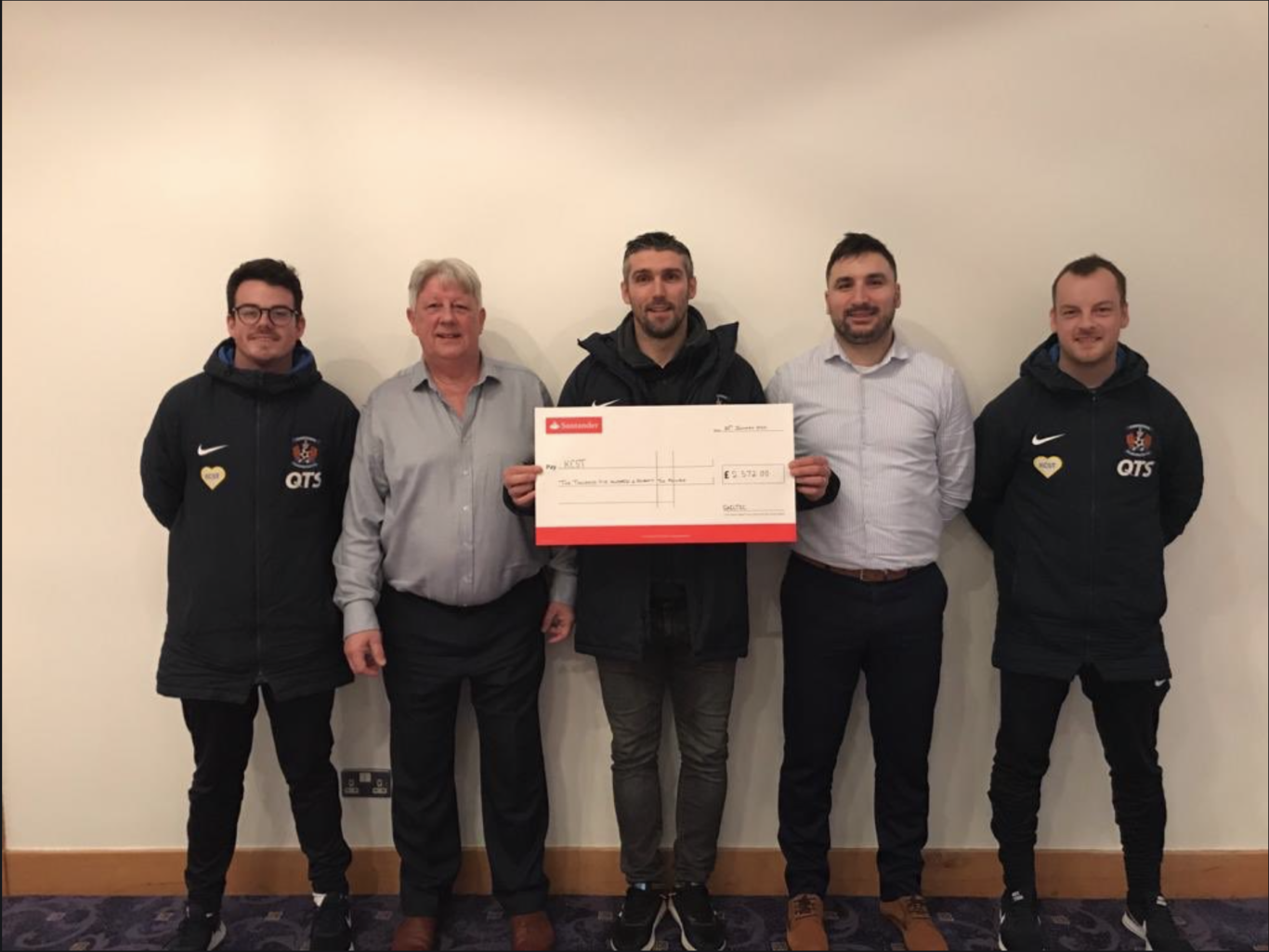 It’s been another busy month for the KCST team: here’s a round-up of some of the projects they’ve been working on this February.

February kicked off with a ‘World Cup’ memories session in the Dean Suite at the Park Hotel. Over 40 attendees took a stroll down memory lane as they relived World Cups from 1958 to 1998

From Maradona’s rear to Gazza’s tears, Ross Mathie chaired proceedings and shared his own memories following and working with the Scotland camp.

Enjoying videos of Pele, that famous ‘no goal’ by England in 1967, and, of course, memories of Scotland defeating Sweden and going toe-to-toe with Brazil!

After some great interaction with a group and the chance to look at some of Ross’ strips from his own collection – the group finished with tea, coffee and Killie pies.

The KCST were delighted to receive a fantastic donation from Gaeltec Utilities in February.

The engineering firm, ran by Guy Wilcox and Daniel Rodrigues,  hosted several staff fundraisers where charity is chosen after each one, with KCST being nominated by staff the past two times!

Community Support Officer Grant Moore was delighted by the donation, and revealed where the money will be going ahead of a busy easter holiday session for the community team.

“The KCST will use this money to host a variety of easter camps for children across East Ayrshire,” he told the club’s official website.

“We want to get as many kids playing football as they can during the holidays, and donations from firms like Gaeltec ensures that can happen. We’re very grateful.”

Let’s celebrate #VictoryThursday with a fantastic partnership with Gaeltec Utilities Safety who have donated a superb amount to the KCST. We will be using this money to create Easter Camps throughout East Ayrshire! #WeAreKillie 🔵⚪️⚽️ pic.twitter.com/1L6ckZ81yO

The club announced a profit at the recent AGM, but the KCST were thrilled to see big losses recorded at the conclusion of their Weigh to Go project.

Overall, the group lost an incredible 60.5kg between them over the course of the project, whilst one of the attendees lost a whopping 19kg himself.

A 12-week programme aimed at men over the age of 16, the group met regularly at Rugby Park to exercise and talk through dietary plans to help them shed the pounds.

The programme is partnered with the NHS Ayrshire & Arran Weigh 2 Go team and covers topics such as fruit and vegetables, calorie intake, eating out, alcohol and more. It was split into two halves: 45 minutes of education about their bodies, before there was 45 minutes of exercise in the next 45.

The project will be restarting end of March so don’t hesitate to contact grantmoore@kilmarnockfc.co.uk for more information.

Young stars from Hillhead and Shortlees Primary have been combing healthy eating and football training this month, thanks to another KCST-lead project.

Go Fitba is one of the most popular KCST programmes, in conjunction The Scottish Football Partnership Trust, schools identify pupils to come along to the 12-week programme at Rugby Park.

They get 45-minutes of healthy eating education through the form of a booklet then 45-minutes of fun with the ball at their feet then , at full-time, they had indoors to receive a different 2-course meal every week from the club’s hospitality staff.

Wendy Connelly, head teacher and programme co-ordinator at Shortlees Primary, told us about the impact GoFitba had had on her pupils, as she looks to get them more active.

She said “Shortlees Primary were delighted to be part of this programme. It’s so important to teach wee ones about how important it is to keep active.

“It’s great that we’re able to provide them with a good feed, as well as the chance to just go out and enjoy a game of football.”

What an AMAZING last #GoFitba session with Hillhead Primary!! A great bunch who have came on leaps and bounds over the 12 weeks!! You are all wee ⭐️‘s #WeAreKillie 🔵⚪️⚽️ pic.twitter.com/aLzVpNlGgP

Killie, along with the Killie Trust and the KFCSA, joined up with East Ayrshire Council as we work towards creating a greener environment at the club. You can catch the full feature on Killie Nation, where director Cathy Jamieson spoke of the mission to help make our local community greener