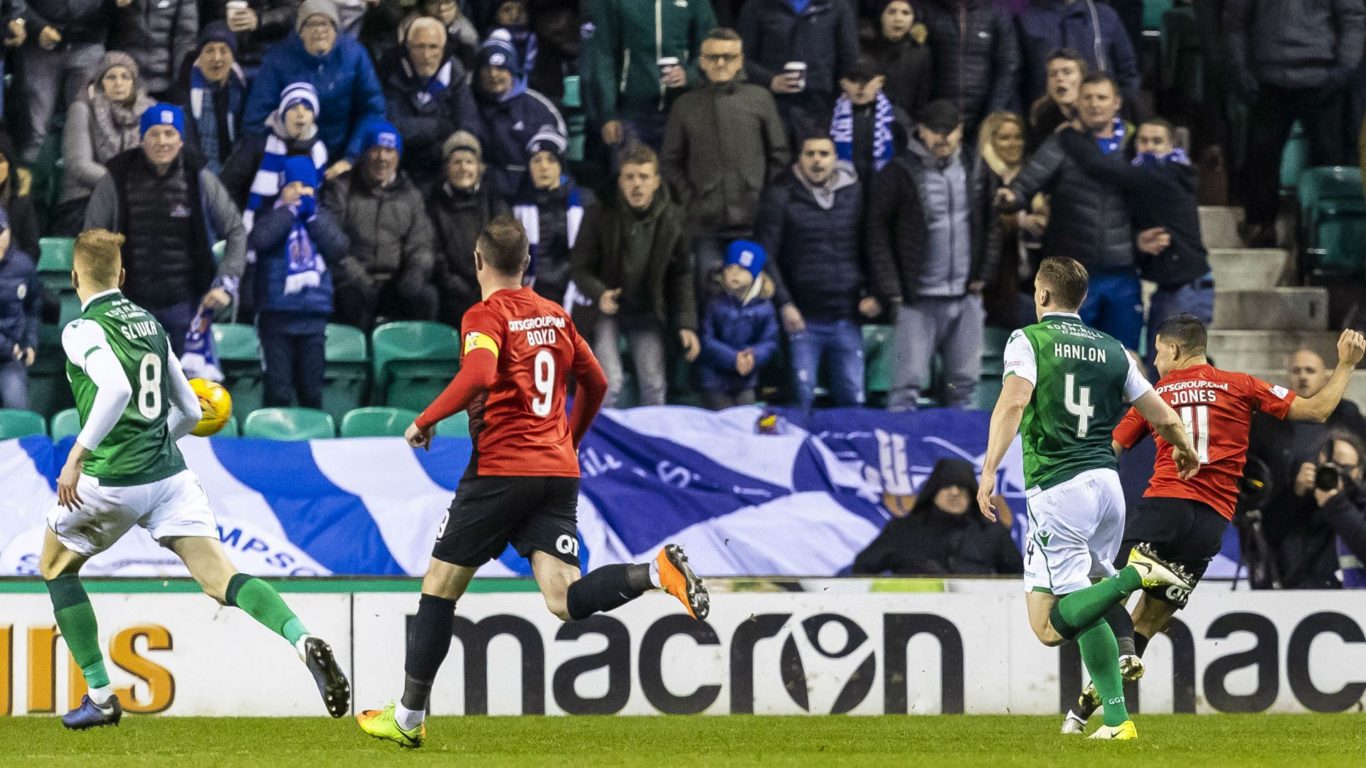 Jordan Jones, restored to the team in place of Kris Boyd, had the best chance of the game for Steve Clarke’s side but Ofir Marciano stood tall to save and keep the scores level.

It was the visitors who created the real clear cut chances in the match with Marciano by far the busier goalkeeper throughout the 90 minutes.

Hibernian went into the match as the Premiership’s in-form team with five victories in their previous six games but they were unable to get the better of Killie’s midfield trio.

Gary Dicker, Youssouf Mulumbu and Aaron Tshibola were controlling the tempo of the match, snapping into tackles, moving the ball around the field and driving the visitors forward.

It was Tshibola, who was presented with a good chance from 25 yards out but his effort flew high and wide of the target.

The home side took 31 minutes to register a strike on goal with Daryl Horgan’s strike comfortably saved by Daniel Bachmann.

Set plays looked like the best route to goal with both Stuart Findlay and Kirk Broadfoot seeing headed efforts well saved by Ofir Marciano in the Hibs goal.

The final chance of the opening 45 came when Broadfoot met McKenzie’s well-placed free kick but Marciano was equal to the attempt once more as the half ended goal-less.

A minor knock forced a change at the interval with McAleny making way for Kris Boyd as the game became scrappy at the start of the second period.

Referee Steven McLean dished out yellow cards to Marc McNulty, Youssouf Mulumbu and Aaron Tshibola as small fouls broke up the rhythm of the contest.

A slack pass by Paul Hanlon almost gifted Killie a goal as Jones intercepted the ball and drove towards goal. He attempted to lift the ball over the goalkeeper only for Marciano to get a strong arm to the attempt and push it to safety.

Hibs were reduced to shots from distance from Stevie Mallan, which Bachmann dealt with comfortably.

Alan Power and Chris Burke entered the field for McKenzie and Tshibola, who had earlier received his final warning from the officials. A Burke corner deflected into the path of Boyd at the back post but he couldn’t get enough purchase to force it into the net.

And so the match ended in a scoreless draw with Killie facing St Johnstone at home in our final pre-split fixture.