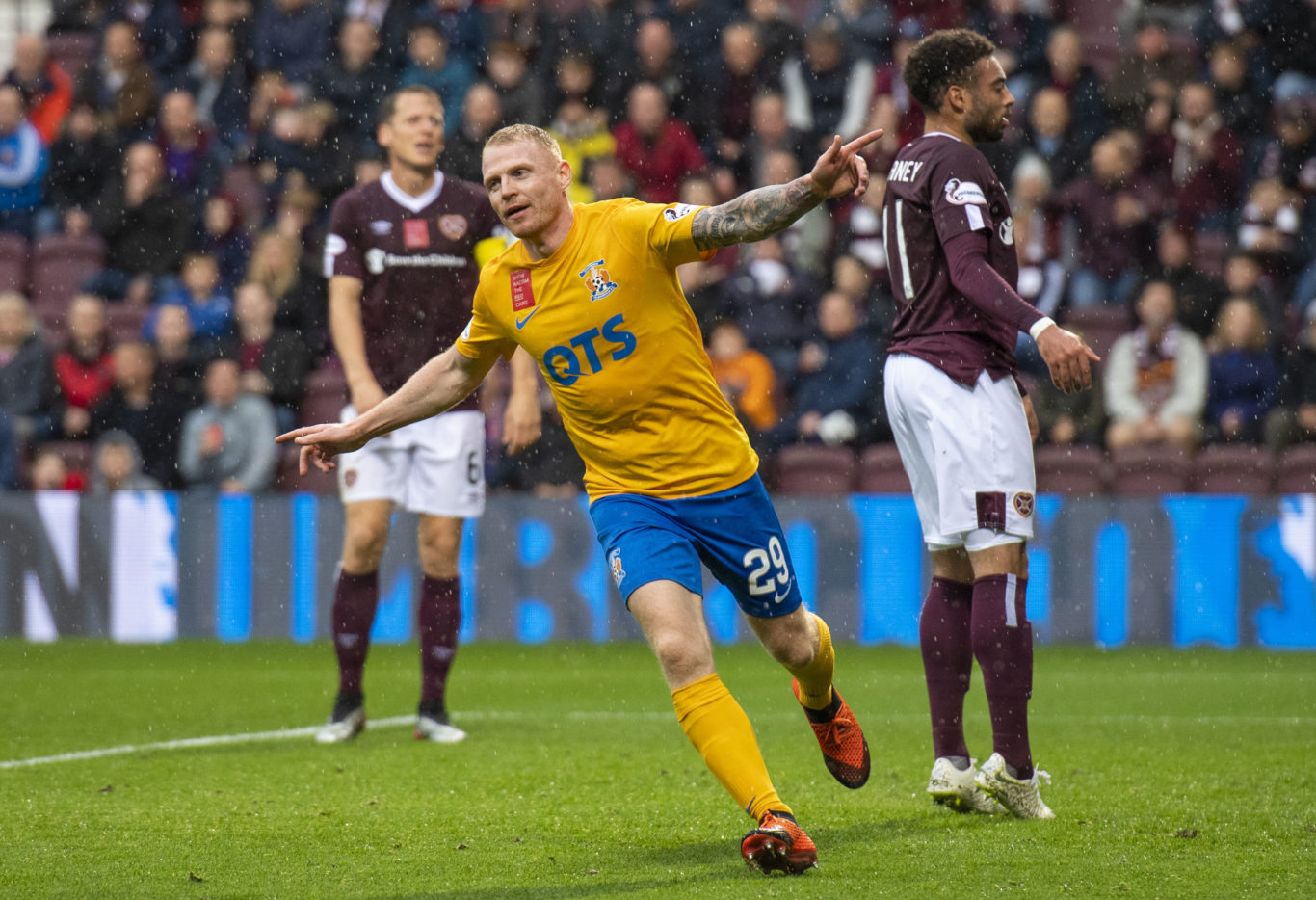 Kilmarnock head into the international break with a valuable win, as we vanquished Hearts 1-0 on a rainy afternoon at Tynecastle.

A first-half bullet header from Chris Burke was enough to ensure that Angelo Alessio’s men escaped the capital with all three points, much to the delight of a noisy Super Killie Away support.

There were a sprinkling of changes to the side that were held by Ross County last week, with Eamonn Brophy back in for the injured Osman Sow – whilst Dario Del Fabro was restored to the heart of centra; defence in place of Alex Bruce.

Killie arguably had the better of the opening exchanges in those first ten minutes: hitting Hearts in broad, attacking waves: much of which was inspired by fine play down the flanks.

Liam Millar met Chris Burke’s cross from the right, and despite getting good contact on it, it flew over Pereira’s crossbar. Moments later, Hearts’ Portuguese stopper could breathe easily once again: Michael Smith hacking away another Burke cross that initially picked out Stephen O’Donnell.

A fine tactical battle was very much the theme of the first-half, as both sides tried to cut each other open with intricate passing:

The home support were left howling in frustration after veteran midfielder Glenn Whelan, courtesy of good passing play by Sean Clare and Jake Mulraney,  saw his prime pop at goal sail well over the crossbar, with Killie well exposed after being caught sleeping at a short corner.

Killie were rewarded for their persistence in attack, bringing the first-half to a close in style.

The opening goal duly arrived on 42 minutes. A sweet Niko Hamalainen-inspired move down the left ended with a quick cross being whipped in – with Chris Burke leaping highest to bury it with a thumping header that sent the Super Killie Away support wild.

Into the second 45, and Killie kept that slick fluidity in attack going. Alan Power drummed up another Killie attack, Liam Millar carrying it well down the wing before offloading a sweet cross towards Eamonn Brophy.

The Wolf made his move, lurking deep in the area, but the ball was caught under his feet as he attempted to shoot at goal.

Brophy’s run of poor luck continued, taking his leave of the game soon after; pulling up with an injury on 64 minutes, with Dom Thomas stepping in to fill the breach.

Hearts came out swinging, hammering away the Killie door in their hunt for an equaliser. Tynecastle was frequently left bemused however, with a composed showing from the central defensive pairing of Del Fabro and Findlay enough to keep the Jambos at bay – with one particularly menacing attack from Jake Mulraney snuffed out with a fine tackle from the Italian.

It wasn’t all plain sailing though, hearts leapt into mouths as we entered the final ten minutes; Oliver Bozanic latching onto a fine Michael Smith cross – with the Australian midfielder heading over as Branescu sighed in relief.

With three minutes of added time, Alex Bruce entered the game as Killie looked to hold on to those precious three points.

There wasn’t to be a late goal, for either side, and Killie held on to secure a massive win as domestic football takes a backseat to to the international game.