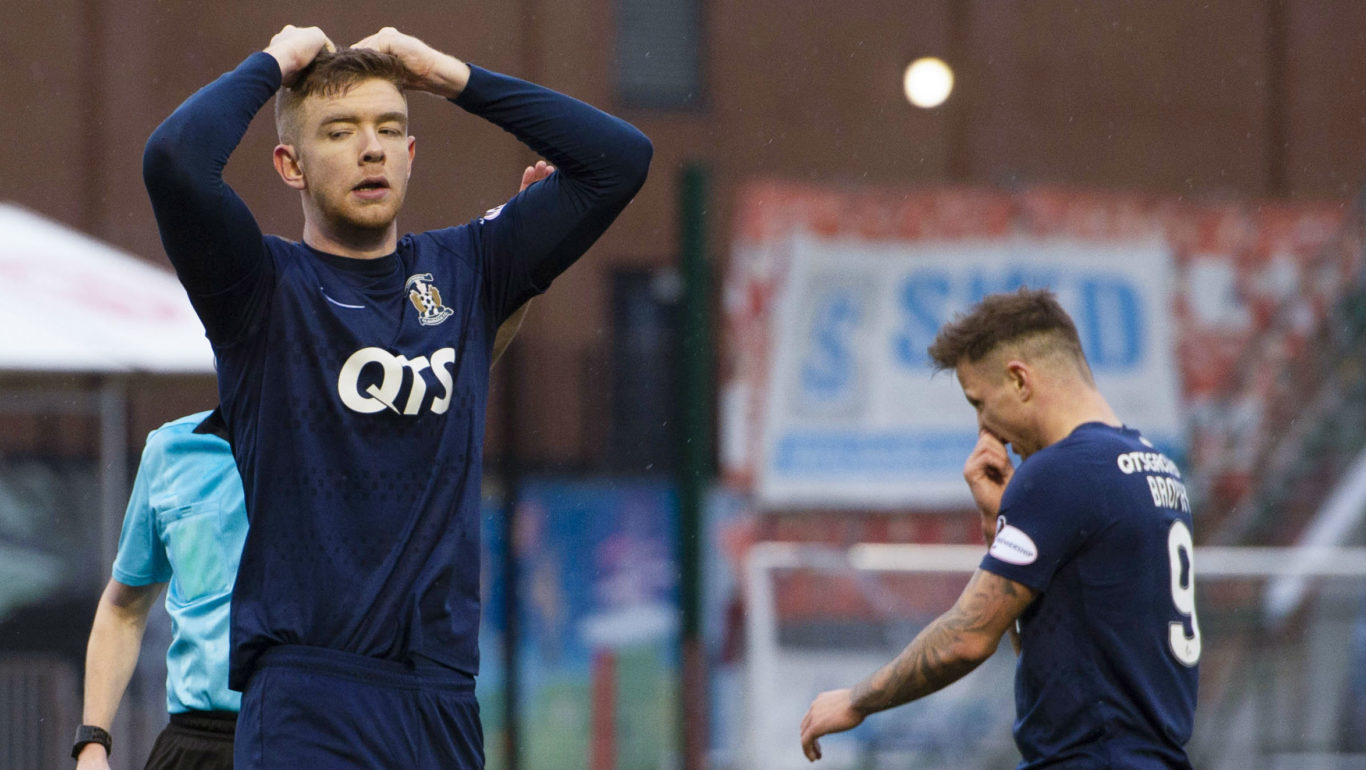 A late penalty from Marios Ogkmoe saw Killie go down to ten-man Hamilton in Lanarkshire to put a huge dent in our top six hopes.

Killie knew this would be a crucial match if there were to maintain any hope of challenging at the top end of the table.

Alex Dyer handed a first start of the season to Stephen Hendrie at left back while Alan Power returned from suspension with Greg Kiltie dropping to the bench.

Rory McKenzie made his 250th Killie appearance in midfield with the forward pairing of Nicke Kabamba and Eamonn Brophy looking lively in the opening stages, combining to set up Chris Burke but the winger saw his effort saved by the feet of Luke Southwood.

Playing in front of 1,023 Killie fans, the visitors handed a first chance to Hamilton when Findlay misjudged the flight of the ball to allow David Moyo a clear sight of goal. Laurentiu Branescu did very well to smother the striker’s shot before Findlay made amends with a clearance.

Alex Dyer’s men dominated the ball but could not find a breakthrough against a resolute Accies side who were forced into two first-half changes due to injuries with Mickel Miller and Will Collar coming on for Jamie Hamilton and Blair Alston respectively.

The hosts improved after the interval with the dangerous Ogkmpoe seeing an effort blocked by Kirk Broadfoot before Branescu stretched to deny the forward once more.

This was a tasty encounter with tough tackles galore with home winger Miller entering Willie Collum’s book for a mistimed slide tackle on Stephen O’Donnell. And that booking would prove to be costly as Miller fouled Chris Burke ten minutes later to duly receive his marching orders.

Minutes before gaining a man advantage, the Killie boss had made a double switch with Hamalainen and Kiltie replacing Hendrie and McKenzie respectively. Kyle Connell was also introduced into the action for the final five minutes as Killie pushed for a winner only to be hit by a late sucker punch.

As the ball entered the Killie box, the referee judged that Stuart Findlay had caught Ogkmpoe while trying to clear the ball and the Accies forward found the top corner despite the best efforts of Branescu, who got his hand to the ball.

It capped a disappointing day for the Ayrshire side as a late flurry of corners ended without any reward.