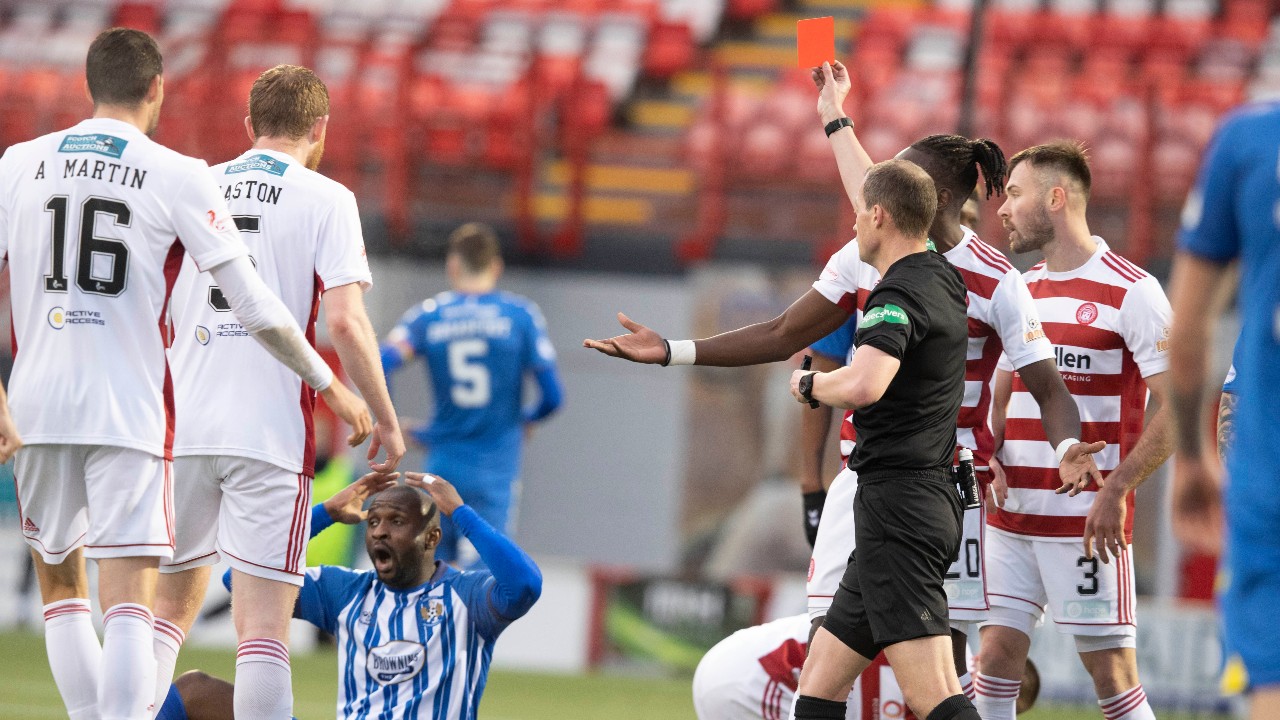 Danny Rogers has really grown throughout the campaign as Killie’s leading goalkeeper and the shot stopper showed good handling and shot stopping skills.

After a week dominated by disciplinary headlines, Killie also had to contend with injury issues with captain Gary Dicker, winger Chris Burke and defender Zeno Ibsen Rossi all missing with knocks while Rory McKenzie could only make the bench after a bout of food poisoining.

Clevid Dikamona replaced the suspended Stuart Findlay at the heart of the defence but his comeback from injury would only last half an hour before he was handed his marching orders by referee Willie Collum.

The centre back was shown a straight red for a lunging tackle on Scott Martin and unlike previous weeks, Killie could not salvage the situation while a man down.

Eamonn Brophy was back on his old stomping ground and he breached the Accies offside trap twice but was unable to really test Ryan Fulton in the home goal.

Nicke Kabamba was also presented with an opportunity from a bouncing ball just inside the penalty area but he lofted his attempt over the crossbar.

Alex Dyer’s side were controlling the match in possession through Aaron Tshibola and Alan Power in the centre of the park. Mitch Pinnock on the wing saw his cross halted by former Killie man Lee Hodson with loud appeals for a penalty kick, which were waved away by the officials.

The second half followed a similar pattern with the visitors probing to find openings but without true clear-cut opportunities on goal.

Nathan Thomas was introduced into the action by the home side and the wide man injected fresh ideas into the Hamilton attack. Halting Pinnock’s attempted dribble down the sideline, Accies worked their way into the box where a shot which struck Brandon Haunstrup’s arm resulted in a spot kick being awarded.

Ross Callachan stepped up and dispatched from 12 yards to give Brian Rice’s outfit something to hold on to.

Killie threw balls into the box but nothing would quite fall for any of the men in blue and white on a very frustrating afternoon.