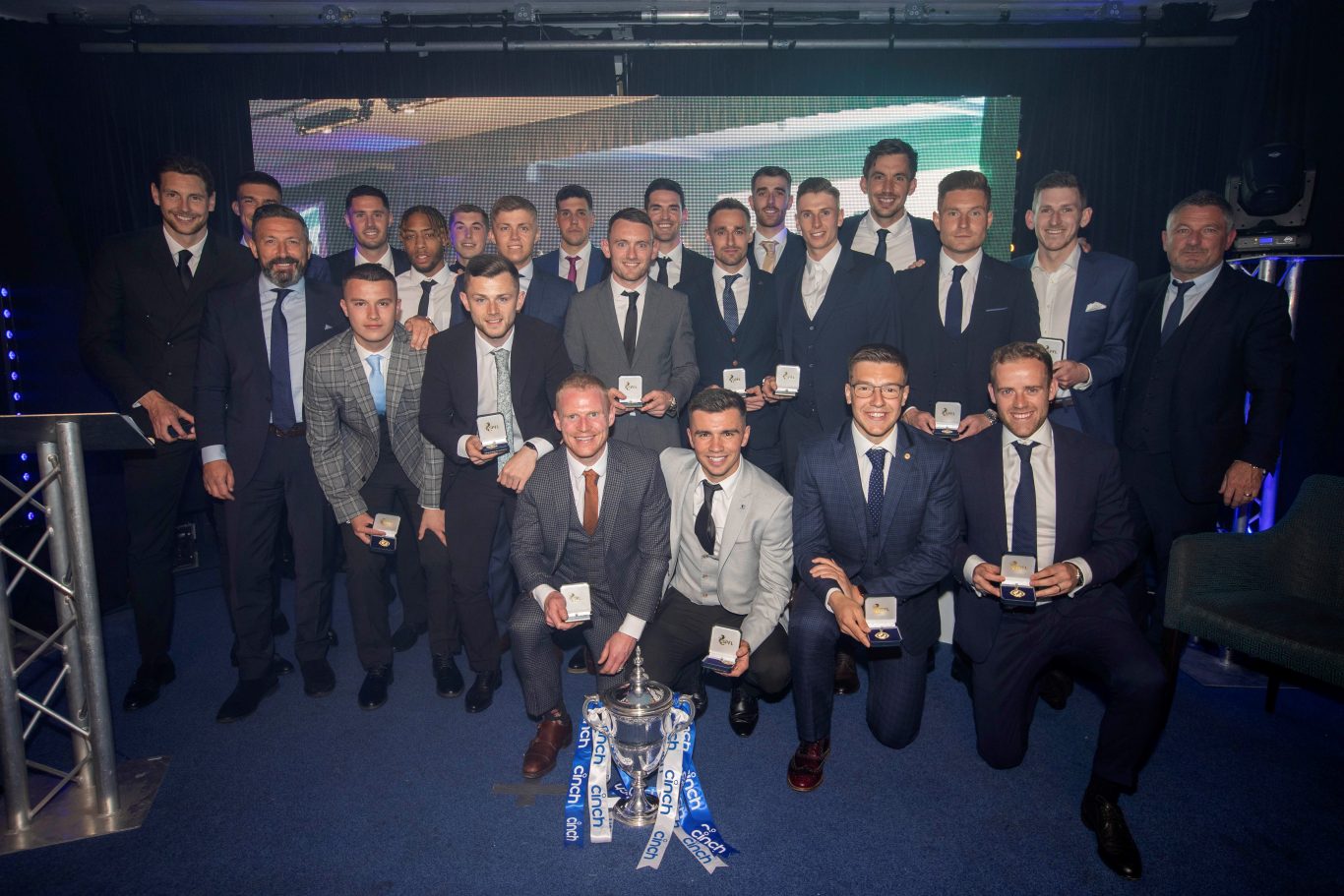 Killie’s Championship winning squad were honoured at the official club Player of the Year awards as three legends took their place in the Hall of Fame.

Hosted by John Barnes, fans, sponsors and guests gathered to pay tribute to Derek McInnes and his squad as they marked a triumphant campaign on the field and promotion back to the Scottish Premiership.

Here are the award winners 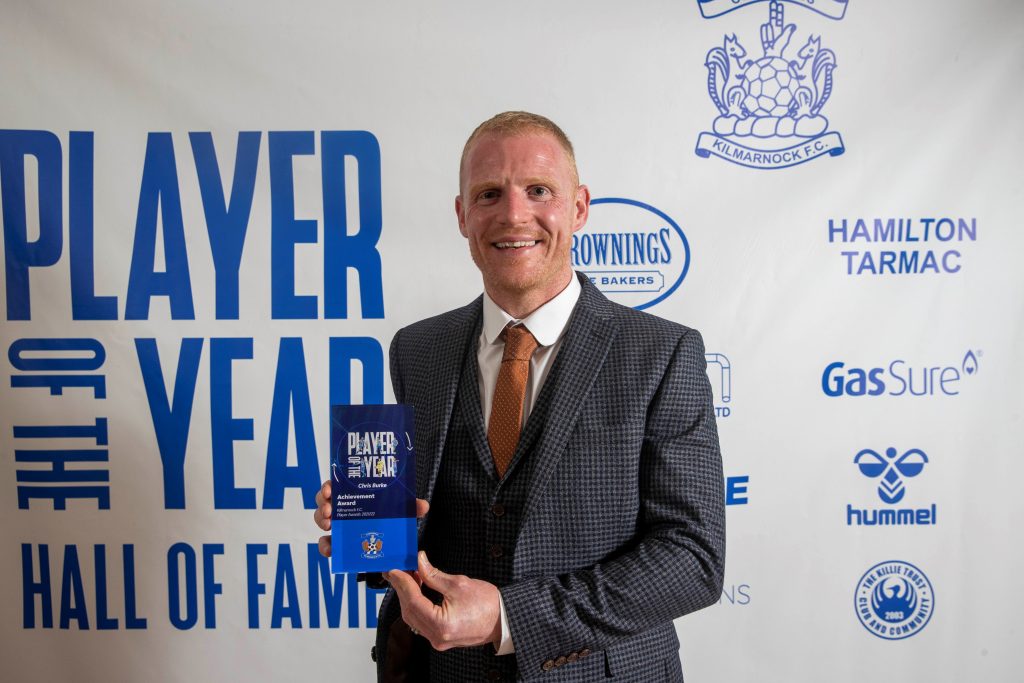 The inaugural Manager’s Achievement Award is to recognise a player, coach, member of staff or volunteer who has made a positive impact on the club throughout the year. In an emotional address, Chris explained how his love for Kilmarnock has developed during his five years at Rugby Park and paid tribute to the unity of the squad in achieving our title win. 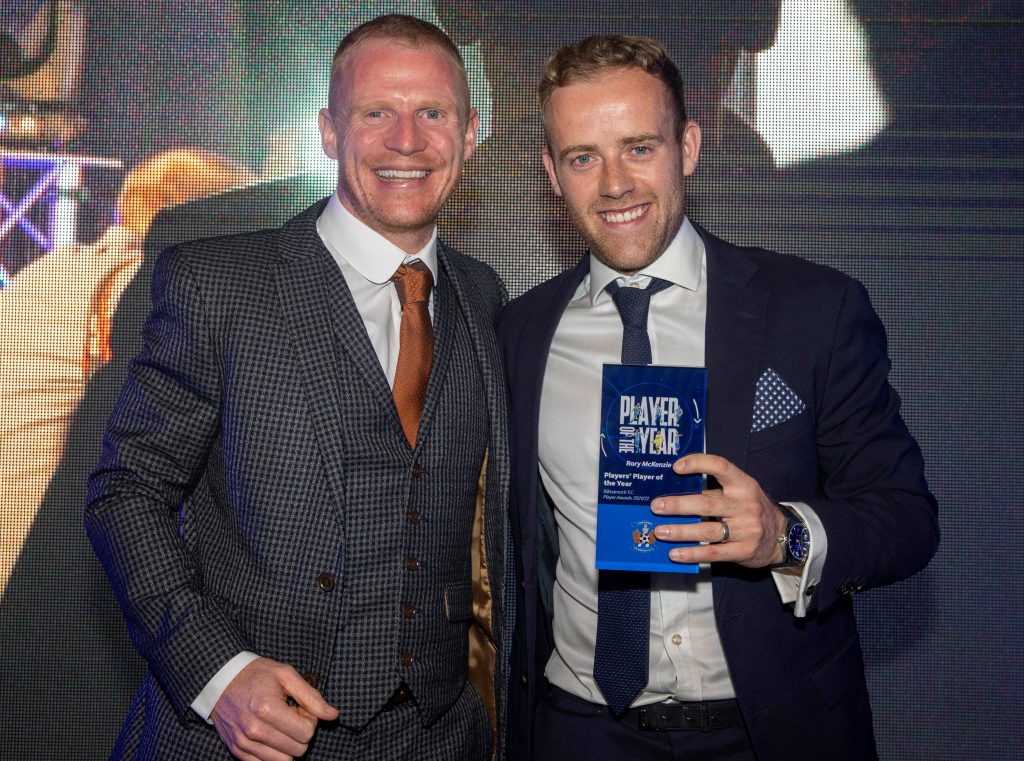 What a season it has been for our Local Hero. A hugely important derby goal at Somerset, passing 300 appearances in a Killie shirt and lifting the Championship title. Voted for by his team-mates, Rory was presented with his prize by Chris Burke. 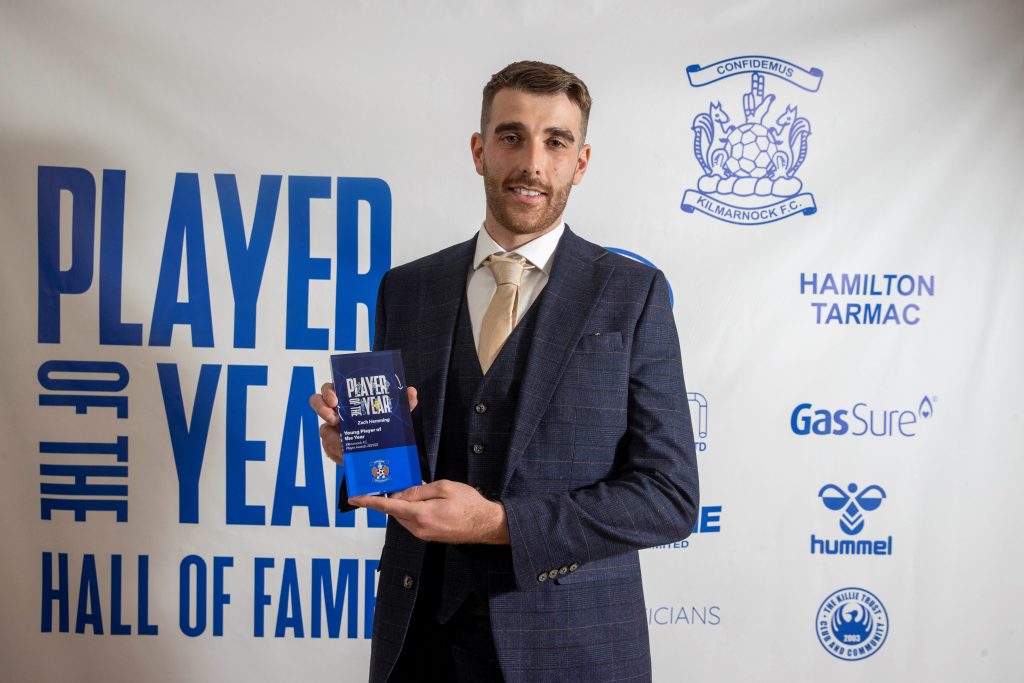 When he arrived last summer, who could have predicted the impact this boy on loan from Middlesbrough would have on the team?

Zach came up with big saves in big moments and became a penalty saving specialist during his season at Rugby Park alongside embracing fans and local businesses. His Young Player of the Year prize is just rewards for an outstanding season between the sticks. 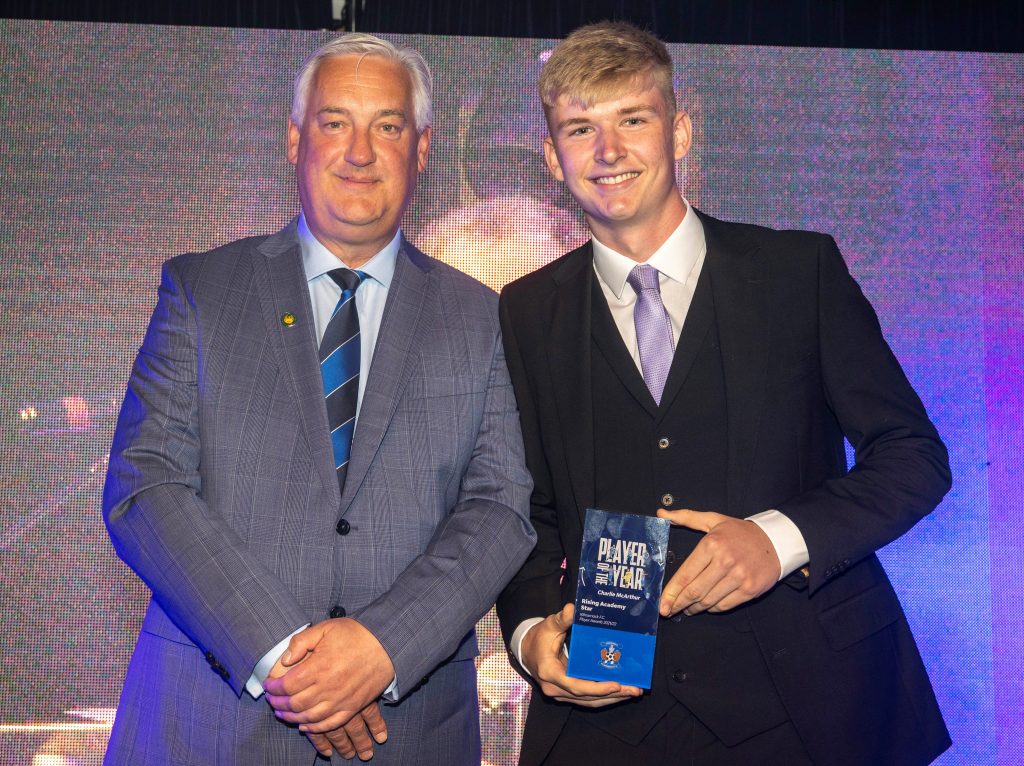 He’s one of our own and we couldn’t be prouder. Season 2021/22 saw Charlie McArthur make his first team debut with an outstanding display against Queen’s Park in the SPFL Trust Trophy and he continued to shine from that moment on.

Further appearances against Hamilton and Raith Rovers gave fans more glimpses at this homegrown talent and he was rewarded with his first league start on the final day of the campaign at Stark’s Park. Alongside his Killie bow, Charlie has captained Scotland U17s throughout the season and he’ll be aiming to develop even further in 2022/23.

This award was presented to Charlie by Jim Thomson, chair of our official Academy partner, The Killie Trust.

Goal of the Season – Kyle Lafferty and Blair Alston 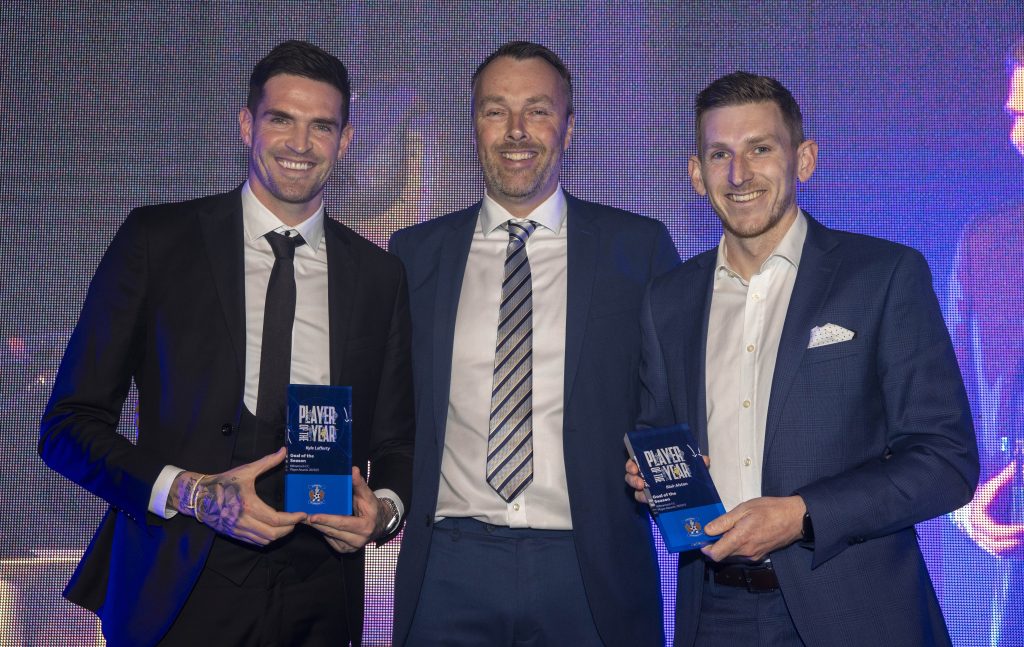 With so many excellent goals to choose from, the judges had their work cut out with this award.

Kyle Lafferty earned the prize for his stunning overhead kick against Dunfermline in February while Blair Alston got a share of the award for his goal which won the league at Rugby Park v Arbroath.

Both players were presented with the prize by Roddy Frew of GasSure. 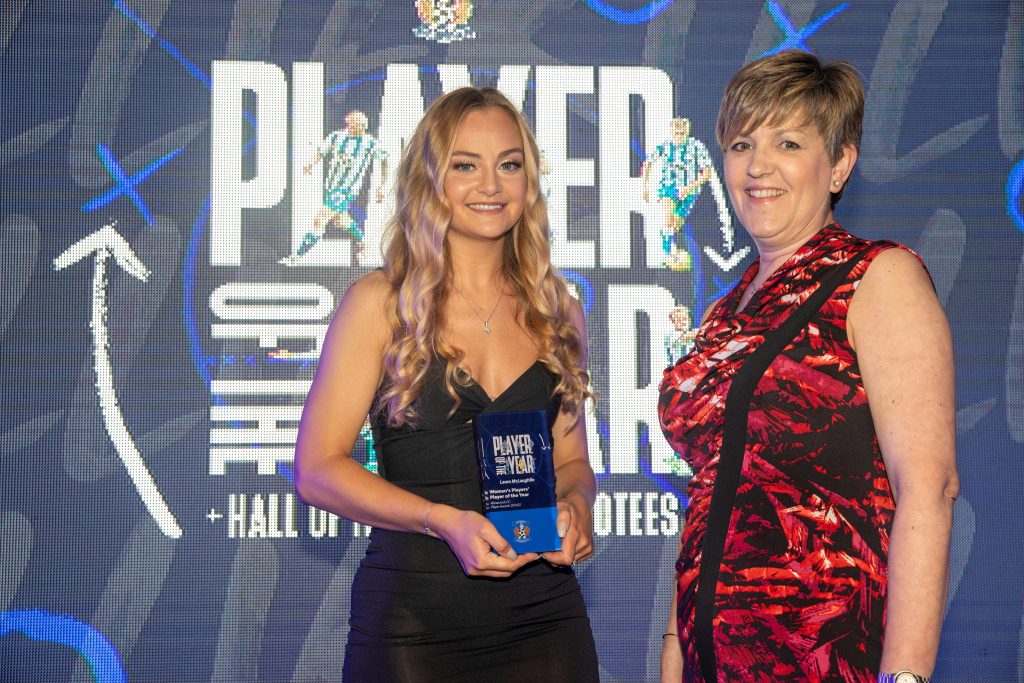 A centre back by trade, Laura popped up with a number of important goals as well as strong displays at the back this term and she’s continued to grow into the role of leader in the team.

Lesley Smith from Urquharts Opticians presented Laura with her awards and we look forward to many more great displays from the skipper as Killie close out the season in the next two weeks.

Player of the Year – Fraser Murray 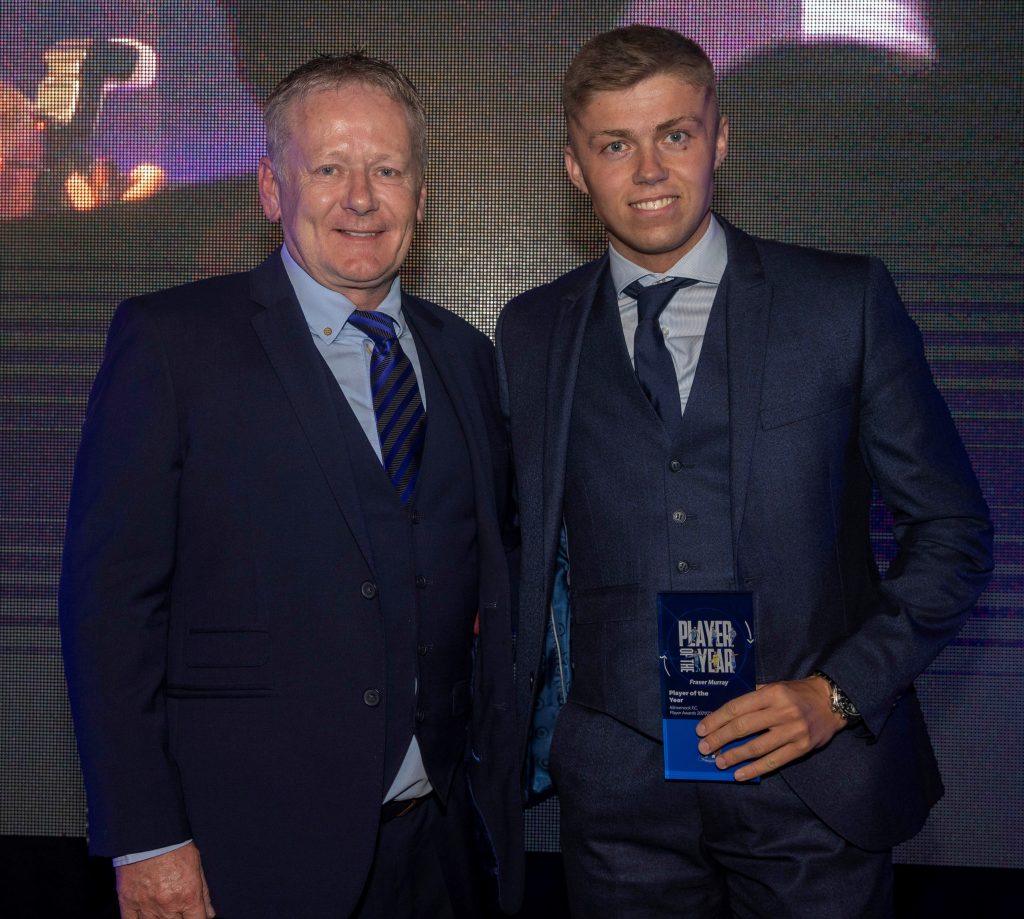 Fraser Murray made more outfield appearances across all competitions than any other Killie player and his influence on the side continued to grow as the title run in developed.

His close control and set play delivery were key factors as Derek McInnes’ Killie powered their way towards the Championship.

Blessed with an eye for goal and a key pass in the final third, Fraser showed his willingness to play for the team with a number of positional changes over the course of the campaign.

Fans have warmed to this exciting talent and his never say die attitude. A fine debut season with Killie with the promise of more to come. Congratulations Fraser with John Gall from Brownings the Bakers handing over the award. 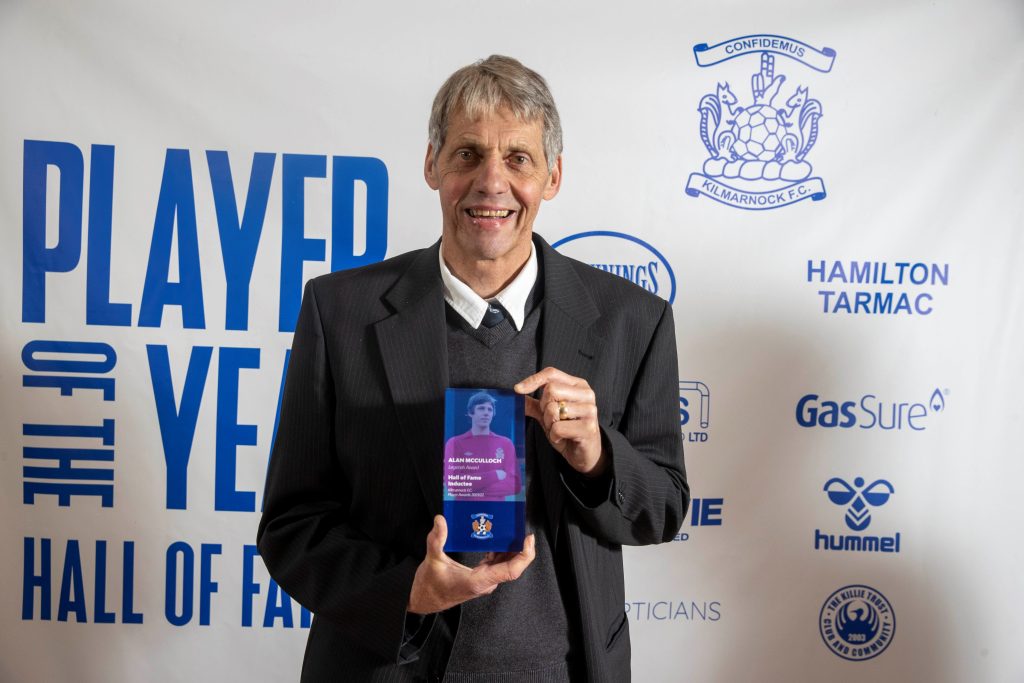 One of a long line of fine Kilmarnock goalkeepers, Alan McCulloch played 440 Scottish League matches for the club, by far the most appearances by a Killie keeper, and only Alan Robertson, Frank Beattie and Stuart McLean have played in more league matches for Kilmarnock.

Alan kept 137 clean sheets in the league, including a club-record seven consecutive shutouts in September/October 1989. After 17 years of sterling service to Killie, he played his final game for the club in 1990. 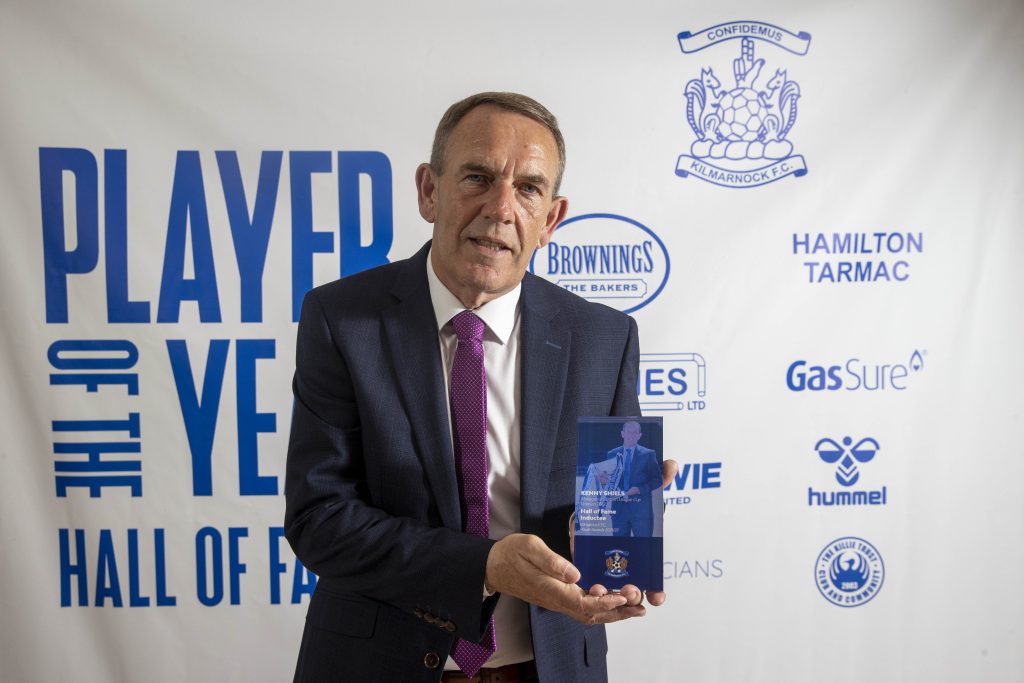 Kenny Shiels was the man who finally helped bring the Scottish League Cup to Rugby Park in 2012 after a dramatic win over Celtic at Hampden.

Arriving in Ayrshire as Assistant Manager to Mixu Paatelainen for season 2010/11, he was appointed interim manager when Mixu departed for the Finland National Team.

Under Kenny, the 2011/12 League campaign proved a steady one, but it was in the League Cup where everything came together. Wins over Queen of the South and East Fife led to an Ayrshire derby in the semi-final at Hampden, and it was Kenny’s son, Dean, who scored the only goal in extra time against a defensive Ayr side to set up a Final against Celtic.

Celtic were massive favourites to win, but it was Killie who won the League Cup for the first time thanks to Dieter Van Tornhout’s late header, sparking emotional scenes amongst the Kilmarnock support.

Killie beat Rangers twice that season, and followed that up in 2012/13 with a 2-0 win at Celtic Park, the club’s first win there since 1955. After parting company with Killie in 2013, Kenny took over as manager of Morton. Spells at BEC Tero Sasana in Thailand and Derry City followed, before his appointment as coach of the Northern Ireland Women’s side. 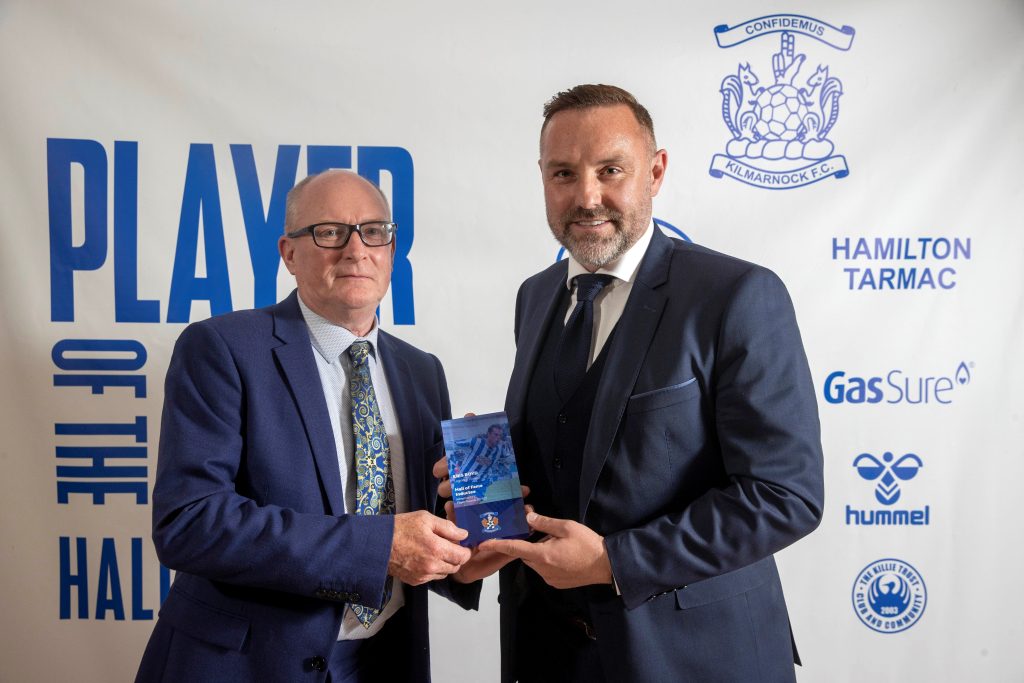 Kris Boyd is one of the greatest goalscorers in Killie’s history with his total of 121 league goals, equal to that of the late, great Eddie Morrison, and is beaten only by our all-time top marksman, Willie Culley.

A Youth Academy graduate, Kris made his first team debut in May 2001 and in his first spell, he scored 63 league goals, including a record-equalling five in a 5-2 win over Dundee United at Rugby Park in September 2004.

A Scotland international, Kris also played for Rangers, Middlesbrough, then Nottingham Forest on loan, before signing for Turkish club Eskisehirspor.

After a spell with Portland Timbers in Major League Soccer, during 2012/13 Kris returned to Rugby Park for a second spell at Killie. In 2013/14 he had a fine return of 22 goals, but in June 2014 he signed again for Rangers, then in the Championship.